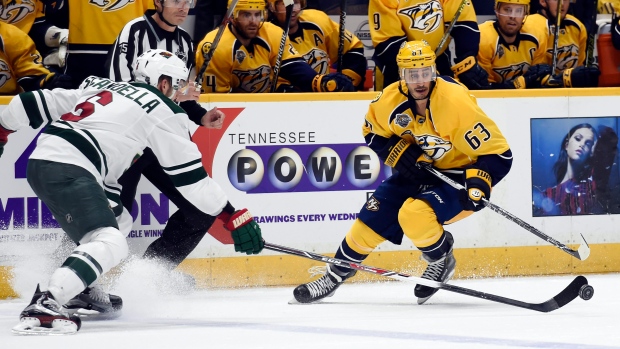 Hutton made 29 saves for his third career shutout and the Predators beat the Minnesota Wild 3-0 on Saturday night to end a five-game losing streak.

Hutton made his first home start of the season and stopped 25 shots over the first two periods before Nashville's defence locked down Minnesota in the third. He was filling in for Pekka Rinne after the All-Star lost his last four starts.

"I just try to go out there and help my team win," Hutton said. "Obviously, whenever they don't score that's a good thing as a goalie. Our penalty kill was phenomenal tonight."

Minnesota has lost four straight. Its power play went 0 for 3 and the Wild were shut out for the second straight game.

"Hutts did a great job — he was amazing in net," Josi said. "He was huge for us tonight, especially in the second period when we didn't play that well and they out-chanced us. He's been great all year whenever he had to step in."

Nystrom redirected Shea Weber's shot from the right point inside the far post 1:24 in. That was Nashville's first shot of the game.

It was the second straight game the Predators have gotten off to a quick start. Kevin Fiala got his first NHL goal 59 seconds into a 5-4 overtime loss at Winnipeg on Thursday night.

"It's good to get a win," Predators coach Peter Laviolette said. "It was a big division game. We came out a little slow in the first 10 minutes and (Carter) had a lot of activity. If he wasn't sharp early, the game could have swung a different way."

Josi increased the Predators' lead to 2-0 with a power-play goal at 6:14 of the third period. The All-Star defenceman roofed his own rebound into the left corner of the net over a sprawled Dubnyk for his 10th goal of the season. Minnesota defenceman Matt Dumba was in the penalty box for delay of game after knocking the Wild net off its moorings during Craig Smith's breakaway.

Nashville centre Ryan Johansen got the primary assist for his 200th career point in his first game in Nashville after being acquired in a trade with Columbus on Jan. 6.

Johansen has two goals and five assists in his first five games with the Predators.

"It's good to get back on the winning side of things," Johansen said. "I just tried to create a rebound (on Josi's goal). There was a lot of traffic. Jos found the back of the net, which was a huge goal for us at the time."

"It's a different kind of frustration tonight, for sure," Wild coach Mike Yeo said. "You're generating the chances and it's a little bit deflating after the second period when nothing goes in, but that's what we have to deal with."

NOTES: Nashville earned a win in its first home game since returning from a four-game trip. ... The Predators finished 3-1 against the Wild this season. ... Minnesota, which lost to Winnipeg 1-0 Friday night for its first shutout defeat of the season, is 2-3-3 in the second game of back-to-backs. ... Minnesota took eight of the first nine shots, but still trailed 1-0.