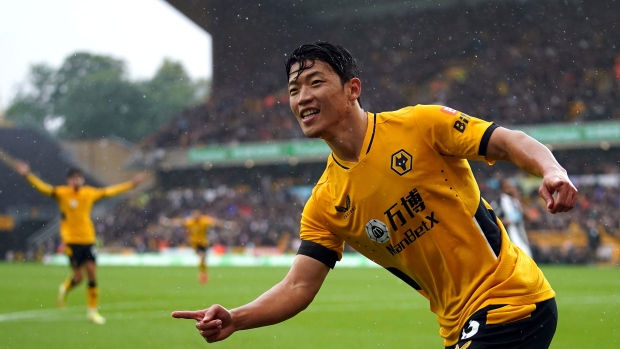 It was a game that propelled Erling Haaland further into soccer’s wider consciousness, earned Takumi Minamino a dream move to the English Premier League, and made American coach Jesse Marsch go viral with an animated, expletive-laden halftime speech.

Hwang Hee-chan is the latest South Korean player to become a hit in the Premier League because of his successful start to life on loan at Wolverhampton this season. Yet he had already made himself known to English audiences by the way he left Van Dijk flailing and sprawling on the turf with a turn and shot into the far corner that sparked Salzburg’s recovery from 3-0 down to 3-3 at Anfield in October 2019.

Living up to his nickname of “The Bull,” Hwang scored that superb individual goal and then set up one for Minamino — now a Liverpool player — to leave Jurgen Klopp awestruck with his energy and direct running. According to Hwang, Liverpool's manager came up to him after the match and called him a “machine.”

Wolves are starting to realize just what all the fuss is about.

Shrugging off a forgettable past season in Germany with Leipzig, the 25-year-old Hwang is ensuring the millions of South Korean eyeballs trained on England’s popular top division aren’t just focused on the country’s most famous player — Son Heung-min — this season.

Hwang scored the winner off the bench on his debut for Wolves, netted two more in the team’s victory over Newcastle before the international break, and has struck up an impressive partnership with Raul Jimenez to cure Wolves’ bluntness from the opening weeks of the season.

“They are fantastic — Raul’s hold-up play and Chan moving off him, it is working really well at the moment,” Wolves defender Max Kilman told local media this week. “It’s been good to watch.”

Wolves have the option to make Hwang’s move permanent for a reported 13 million pounds ($17.8 million). The way his loan spell has started, the team from central England is unlikely to pass that up.

How different everything seems for Hwang, who is a regular on the wing for South Korea and played against Syria and Iran in World Cup qualifiers over the past week, compared to last season when his first year at Leipzig was ruined by contracting the coronavirus.

According to then-Leipzig coach Julian Nagelsmann, Hwang said he felt “almost dead” for a week after testing positive upon returning to Germany from international duty in November.

He had scored once in seven appearances for the team up to that point and after an absence of nearly two months, he made just three starts in the final five months of the Bundesliga without scoring.

That contrasted sharply with the 16 goals and 22 assists Hwang recorded in the 2019-20 season with Salzburg, the Austrian club he left South Korea to join at the age of 19.

Now, he is the 14th South Korean to play in the Premier League — a league to which he was attracted as a kid when watching compatriot Park Ji-sung play for Manchester United — and the seventh to score in it.

Hwang moved to Wolves in the final days of the summer transfer window and was a substitute for three games before forcing his way into the team at the expense of Adama Traore, the fast but erratic Spain winger.

Hwang has shown much more composure in front of goal than Traore, as displayed with his two well-taken finishes against Newcastle from passes by Jimenez.

His ability to press from the front — an approach drilled into him from his time at Salzburg and Leipzig — fits in with the style of play preferred by Wolves manager Bruno Lage, who took charge during the offseason as a replacement for Nuno Espirito Santo.

And playing to the left of Jimenez, Hwang is taking up a position that Son — a player he has described as his role model — does for Tottenham alongside Harry Kane. Son has mastered the art of running beyond Kane, who tends to drop deep to link up play, and the Hwang-Jimenez combination has worked that way in recent matches.

Next up for the pair is a trip to Aston Villa on Saturday.

Hwang might be the perfect fit for Wolves in another way, too.

Steve Bull, a former England striker, is one of the club’s greatest players and its record scorer with 306 goals.

Now there is another “Bull” proving to be a fans’ favorite at Molineux.