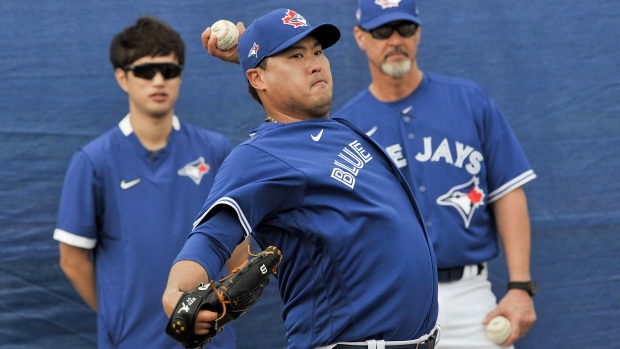 DUNEDIN, Fla. — The ink dried on the contract seven weeks ago, but the Hyun-Jin Ryu signing became official Thursday when the prized free-agent acquisition hopped on a mound in a Toronto Blue Jays uniform for the first time.

For $80 million over four years, the Jays front office hopes it bought the franchise a much-needed top-of-the-rotation arm, something the left-hander is eager to prove was the right decision.

After pitching in Clayton Kershaw’s shadow for his first six big-league seasons, Ryu is the unquestioned ace and leader of the pitching staff.

“Of course it’s nice to be counted on as an ace, but to be honest I’m just another player,” Ryu said Thursday through interpreter Bryan Lee after throwing a 33-pitch bullpen session. “We win games by having all the players put in their effort. At the same time, I do realize the expectation and the weight that comes with this kind of contract and I know exactly what the Blue Jays want from me. So I’m definitely going to try to talk to the younger players because we have a very young core and if I can, I’d like to be their mentor and really work things as a team.”

When the Jays honed in on Ryu over the winter, it was about the soon-to-be 33-year-old’s performance over his six seasons in L.A. Dodger Blue.

But the Jays are also hoping he’ll take on a leadership role and, despite a bit of a language barrier, find ways to become a clubhouse presence on an extremely young and inexperienced ballclub.

It seems Ryu is already embracing that side of things, and the first few weeks of spring training will be about relationship building.

Ryu needs to get familiar with how his catchers go about things, but also pitching coach Pete Walker.

“We actually had a very productive conversation,” Ryu said of Walker. “We took a look at the schedule and how we’re going to approach this spring training, so that was very helpful. We didn’t look at the video together, just the way we talked, we tried to get on the same page together. I think it’s been working out really well.”

When manager Charlie Montoyo hands the ball to Ryu every fifth day, the Jays are expecting to win.

That’s what aces do more often than not.

“I’m excited about that kid,” Montoyo said. “I was really excited when we got him, of course. He was one of the best pitchers last year in baseball. When we got him, I was excited. We got an ace. He’s an ace. What that means is that, every time he takes the mound, we’ve got a chance to win. That’s all you can ask for as a manager and as a team.”

It’s also very apparent that his following is going to be large, with approximately 40 credentialed Korean media monitoring his every move.

There’s also a quotable and thoughtful side to him that should show more as he gets comfortable.

“You know what’s funny? I asked him yesterday, ‘Can you hit when we play the National League?’” Montoyo said with a grin. “He goes, ‘yeah, I can.’ Then he showed me a video of him going deep at Dodger Stadium and he flipped the bat. I said, ‘OK, I’ll let you hit then, no bunting sign for you.’”

The Jays aren’t sure when Ryu will make his first Grapefruit League appearance, but Thursday’s bullpen session was a good first step.

Known to have some unique routines and coming off a career year, the Jays aren’t going to mess with the way the veteran goes about his work.

“Obviously, the things I did in the past off-season helped me last year, so I’m trying to carry that momentum and do the things that made me successful,” Ryu said. “I had a good talk with Pete and the organization and they’re more than willing to help me do the same things that helped me successful over the past couple of years. Right now I’m just trying to carry that good momentum and feel into the next season.

“Getting ready for the season gradually, not really forcing things. Making sure my body is ready to maintain certain types of workloads. I think [I] was able to do that pretty well so I’m trying to do the same thing for this year, as well.”​