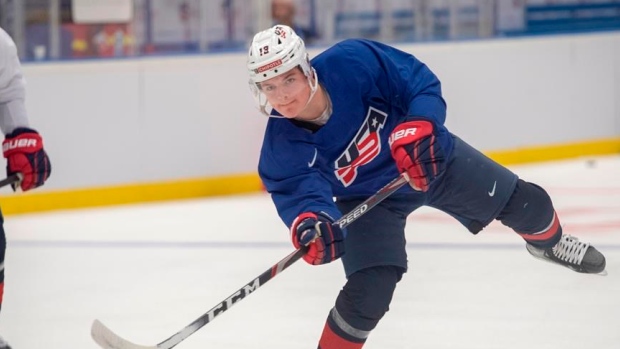 OSTRAVA, Czech Republic — Cole Caufield is getting used to the attention.

Since being selected 15th overall by the Montreal Canadiens at last June's NHL draft, the diminutive winger has been visited by numerous reporters, seen his mentions on social media balloon, and is often one of the top trending names on the website hockeydb.com.

People want to know all about him. And he knows that's simply life with an Original Six franchise.

"I'm not (in Montreal) yet, so I don't really worry about that," Caufield said. "It's special to be part of that organization. They've got so much history.

"It's nice to have my name be talked about, but I'm still in college and that's what I'm focusing on."

Right now, however, he's got his sights set on gold for the United States at the world junior hockey championship.

The five-foot-seven, 163-pound goal-scoring sensation failed to find the back of the net in his team's first three round-robin games, but buried a shot in overtime against the host Czech Republic to help his country secure second in Group B, one point back of Canada.

Caufield and the Americans face a tough test in the quarterfinals Thursday against Finland in a rematch of last year's gold-medal game in Vancouver, one the U.S. lost on a late goal by Kaapo Kakko.

A native of Stevens Point, Wis., Caufied's dry run to start the under-20 tournament was surprising. He scored a record 126 goals in two seasons with his country's national team development program, tied Alex Ovechkin's mark of 14 at the under-18 worlds, and has 12 in 18 games as a freshman at the University of Wisconsin.

"Everyone loves to score goals," Caufield said. "I think I just love it more."

Nicknamed "Goal" Caufield, he wired a laser from a ridiculous angle against Canada at an event this summer — one that was replayed countless times and even caught the attention of some NHL players.

While his dynamic talent with the puck is well documented, teammates point out one of his underrated skills is finding soft spots in the offensive zone before striking.

"I don't think people realize you've got to put yourself in those positions," U.S. centre Shane Pinto said. "He's really smart in the way he plays his game. He's just so crafty."

"He's a hungry kid," added winger Oliver Wahlstrom. "On the ice, off the ice, he's so determined."

And every goal doesn't have to find its way onto a highlight reel.

"They all count," Caufield said with a grin. "It doesn't matter how you get it done. My whole life I've been on the smaller side, and I think that's helped me find quiet areas. I just put myself in an area where I have to beat a goalie, not really pick a corner."

In short, Caufield has learned to use his dimensions as an advantage.

"That's where most people struggle — putting themselves in an area where they can get lost to get away from guys," he explained. "There's so little time now in this game. It's a pretty hard skill to find spots and even get a shot off.

"That's what I continue to work on and find ways to get better at it."

One part of his game that apparently doesn't need any honing is an ability to talk.

"He's a funny kid," U.S. captain Mattias Samuelsson said. "Everybody loves him. You can joke around with him and he'll give it right back, and he's pretty good at it. It's always entertaining."

Caufield said he looked to future pint-sized Hall of Fame winger Martin St. Louis, who made his living when the NHL was geared heavily towards hulking behemoths, as proof when he was growing up that smaller players could excel.

"I wore No. 26 when I was younger because of him," said Caufield, who turns 19 on Thursday. "Just having someone like that to look up to in the league, who's having success, even when it was bigger and heavier, it was something pretty cool.

"Now that it's changed, there's a bunch of (smaller) guys in the league that are doing great things. The league's just getting faster and smarter. I don't think I'll have any problem with the size issue."

So what's "Goal" Caufield's favourite memory of past U.S. teams at the world juniors?

"The John Carlson OT winner (at the 2010 tournament)," he said without missing a beat. "That's the one kids our age look to and dream about doing one day."

With any luck, his moment could be right around the corner.

This report by The Canadian Press was first published Jan. 1, 2020.