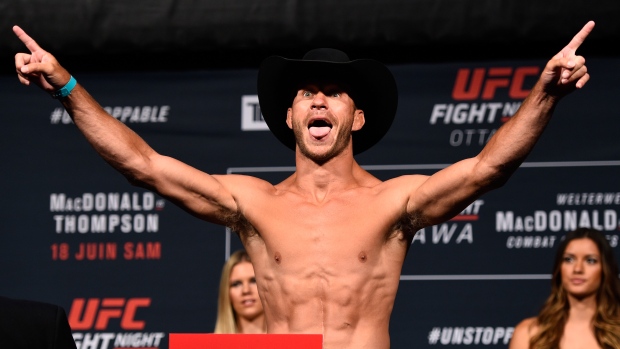 Cerrone had recently been linked to former featherweight and lightweight champion Conor McGregor, but that bout fell apart when it was being targeted as a co-main event, which was a deal-breaker for McGregor according to reports.

“He wants to keep fighting, which is why so many fans love him and so many performances are off the charts,” said Shaw about Cerrone. “He’s going to put on a show. He always does.”

Last April, Iaquinta fell short when he fought Khabib Nurmagomedov for the vacant lightweight championship (had Iaquinta won, it would have remained vacant as Iaquinta weighed in at 156 pounds for his initial matchup with Paul Felder) at UFC 233 in Brooklyn.

“I think back to how well Iaquinta performed against Khabib, in addition to his win against Kevin Lee,” said Shaw. “And look at what [Jorge] Masvidal did this weekend and think about the performance that Iaquinta put up against him back in 2015. So fans in Ottawa have a lot to be excited about.”

Seven Canadians are currently scheduled to fight on the card.

“We are really excited to see Marc-Andre Barriault compete. Obviously Brad Katona and what he’s done with [The Ultimate Fighter] and his first performances in the UFC have been great. It’s nice to see Mitch Gagnon get back. There are a whole variety of Canadian athletes that we’re going to be very excited to showcase,” said Shaw.

Shaw also confirmed that there would be a pay-per-view event held in Canada later this year. Based on the annual staples of the UFC’s pay-per-view calendar, it is likely that the event takes place in August or September.

Tickets for UFC Fight Night in Ottawa are available to the general public starting on Friday.