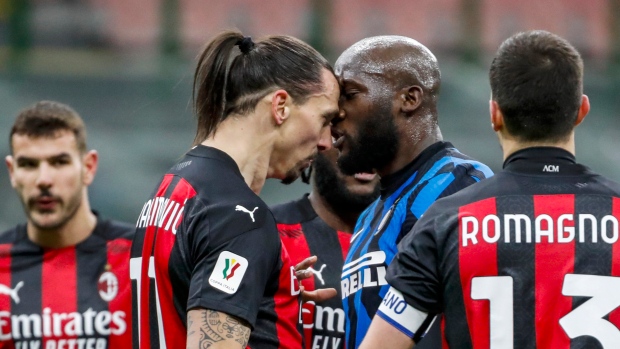 Ibrahimovic and Lukaku , The Canadian Press

MILAN — Zlatan Ibrahimovic took to social media to denounce racism on Wednesday following a spat with former teammate Romelu Lukaku during the Milan derby in the Italian Cup quarterfinals.

“In ZLATAN’s world there is no place for RACISM,” Ibrahimovic wrote on Twitter. “We are all the same race — we are all equal !! We are all PLAYERS some better then others.”

There was a huge argument — and head-to-head clash — between Ibrahimovic and Lukaku just before halftime and both players were given yellow cards. The spat between the former Manchester United teammates continued after the halftime whistle and a visibly furious Lukaku had to be restrained. Italian television said AC Milan representatives had denied any allegations of racism in Ibrahimovic’s remarks to Lukaku, who is Black.

Ibrahimovic was later shown another yellow card after the break for a hard tackle on Aleksandar Kolarov and sent off, leaving his team with 10 players.