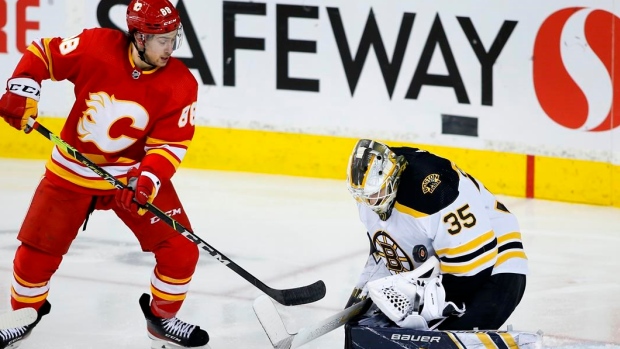 Calgary Flames forward Andrew Mangiapane will skate for the first time in a group this training camp, according to TSN's Salim Valji.

Andrew Mangiapane will skate for first time in a group this training camp; Kadri & Markstrom in second group

The 26-year-old from Toronto, Ont., was listed as a non-participant earlier in camp as he was dealing with an injury.

Mangiapane skated in all 82 regular season games for the Flames last season, scoring a career best in goals (35) and assists (20).

In addition, Valji notes that Nazem Kadri and Jacob Markstrom skated in the second group.

Lines look the same as they have been…notably:

Defenceman Jake Muzzin skated today on a separate ice pad at Toronto Maple Leafs training camp on Monday, according to Jonas Siegel of The Athletic.

Jake Muzzin is on the ice at Leafs camp.

Back discomfort kept him out at the outset last week. pic.twitter.com/j9RJHBVpbr

The 33-year-old missed the start of camp with discomfort in his back. A native of Woodstock, Ont., Muzzin skated in 47 regular season games, recording three goals and 14 points. Muzzin saw action in all seven games of the first round of the Stanley Cup Playoffs against the Tampa Bay Lightning, where Muzzin netted a pair of goals.

Montreal Canadiens forward Nick Suzuki is back on the ice while continuing his recovery from a lower-body injury and is expected to be return to action within the week, according to TSN's John Lu.

#Habs injury updates:
Suzuki (LBI) is back on the and continuing his recovery and should return to action within the week.

Edmundson (LBI) is making progress on his recovery but remains out indefinitely.

The 23-year-old, who was recently named the 13th captain in Canadiens history, signed an signed an eight-year, $63 million extension last October and tallied 21 goals and 40 helpers in 82 games last season.

The Canadiens also announced Monday that defenceman Joel Edmundson is making progress on his recovery from a lower-body injury but remains out indefinitely.

Edmundson, 29, made his 2021-22 season debut on March 12 and appeared in just 24 games after being sidelined with a back injury.

In addition, Madison Bowey is day-to-day with an unspecified injury. He appeared in two games last season with the Vancouver Canucks and joined Montreal on a one-year deal this past July.

St. Louis Blues prospect Keean Washkurak is set to undergo wrist surgery Monday and will be re-evaluated in four to six weeks, the Blues announced.

Blues prospect Keean Washkurak will undergo surgery on his left wrist today and will be re-evaluated in four to six weeks. https://t.co/wio12xlyxh #stlblues

The 21-year-old was selected by the Blues in the fifth round (155th overall) in the 2019 NHL Draft. The Waterloo, Ont., native skated in 64 regular season games for the Blues' AHL affiliate Springfield Thunderbirds, tallying 13 goals and 23 points.