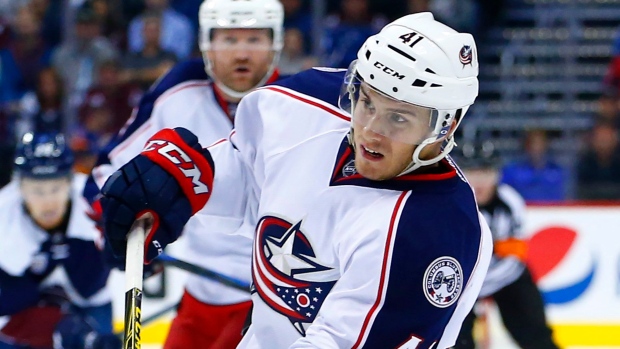 The Columbus Blue Jackets announced that they have activated centre, Alexander Wennberg off injured reserve.

The 25-year-old from Stockholm, Sweden, missed 12 games due to an upper-body injury suffered against the Montreal Canadiens on Feb. 2. Wennberg had played in 52 games so far this season and has recorded 20 points. The former 14th overall selection in the 2013 NHL Draft is now in his sixth year with the Blue Jackets and has registered 199 points in career 410 games played with Columbus.

In addition, it was reported by Jeff Svoboda that Jackets goaltender Elvis Merzlikins did not partake in the team's morning skate after leaving Monday's game with an injury.

Elvis Merzlikins is not at #CBJ morning skate after leaving Monday's game with injury.

Jets head coach Paul Maurice talked to the media following the team's win against the Washington Capitals and provided an update on Patrik Laine.

"He's going to come with us and we'll see," said Maurice. "Good new, there isn't anything broken," he added.

Laine did not return to last night's game after blocking a shot off his foot which resulted in him leaving the game early against the Washington Captials.The 21-year old, the second overall pick in the 2016 NHL Draft from Tampere, Finland, has already shattered his point total from last year (50) with 59 points on the season through 64 games played. In his fourth NHL season, Laine has recorded 243 points in 301 games with the Jets.

The Jets also announced that they have recalled forward C.J. Suess from their AHL affiliate, the Manitoba Moose.

The 25-year-old made his debut with the Jets on Nov. 1, 2019, against the San Jose Sharks. During his time with the Moose, the St. Paul, Minn., native has recorded 26 points in 54 games. This 2014 NHL Draft pick played in just 26 games for the Moose last season as an injury kept him sidelined.

Forward Chris Wagner exited last night's game against the Calgary Flames after suffering an upper-body injury. He did not return and is now listed as day-to-day and will be re-evaluated.

The 28-year-old from Walpole, Mass., has spent six years in the NHL after being drafted 122nd overall by the Anaheim Ducks in 2010. He has split his playing time between the Ducks, Colorado Avalanche, New York Islanders and Boston Bruins. In 313 games played since his 2010 NHL draft, he has recorded 58 points.

The Tampa Bay Lightning and head coach Jon Cooper are being extra cautious with Steven Stamkos, as per Lightning radio analyst Caley Chelios.

Cooper said they would like to be as “thorough as possible” with Stamkos injury. Hoping to know exactly what his timeline for returning is by tomorrow or Sunday. He confirmed his injury is unrelated to any of his previous surgeries.

Stamkos has been dealing with a nagging lower-body injury for a majority of the season. In Tuesday's game against the Toronto Maple Leafs, Stamkos played the first two periods but watched the third from the bench. The 30-year old, Markham, Ont., native has played in 56 games for the Lightning this season while battling through injuries and sits in the top 20 for points scored with 66 on the year. The former first-overall selection from the 2004 NHL Draft has spent his entire 12-year career with the Lightning. He's the current franchise leader in goals scored (422), even-strength goals scored (262) and hat tricks (9).

Dominik Kahun will make his debut for the Buffalo Sabres tonight against the Vegas Golden Knights while Michael Frolik will be a healthy scratch as per Buffalo News Sports' Mike Harrington reports.

Kahun has yet to play a game for Buffalo since being acquired from Pittsburgh on the Feb. 24 trade deadline in exchange for Connor Sheary and Evan Rodrigues. He has been battling a lower-body injury since the 21st.

The 24-year old, Palana, Chech Republic, native signed with the Chicago Blackhawks as an undrafted free agent after having spent time with the Sudbury Wolves of the OHL. In his first NHL season, Kahun played in all 82 games of the 2018-19 NHL season, recording 37 points. The following year, he was traded to the Pittsburgh Penguins where he played in 50 games before being dealt to the Sabres.

Frolik was also acquired by the Sabres earlier this season in a deal with Calgary in exchange for a fourth-round pick in the 2020 NHL Draft.

The 32-year old, Kladno, Czechoslovakia, native has split time between the Florida Panthers, Chicago Blackhawks, Winnipeg Jets and Calgary Flames before being dealt to Buffalo. The 2013 Stanley Cup champion with the Blackhawks has played a total of 56 games so far this season - 38 with Calgary and 18 with Buffalo - and has recorded 14 points. The former 10th-overall selection in the 2006  draft has played in a total of 849 NHL games, registering 384 points.