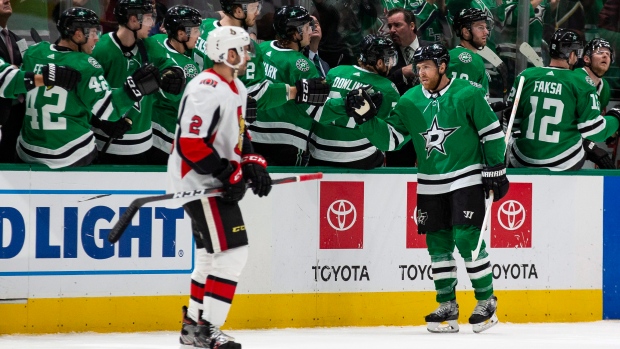 Forward Derek Ryan is rumoured top be sick; he's not on the ice for this morning's practice ahead of the Flames' match up against the Chicago Blackhawks. Sam Bennett is in his spot at the centre of the third line.

The Jets have reassigned forward Andre Chibisov to the Manitoba Moose, according to the team.

TRANSACTION: The #NHLJets have reassigned F - Andrei Chibisov to the Manitoba Moose.

Marcus Hogberg will make his 1st career start for the Sens in the Battle of Ontario.

Joe Pavelski will be a game time decision for tonight's match up against the Montreal Canadiens, according to Sean Shapiro of The Athletic.

Pavelski officially a game time decision again. He spoke to media this morning like he was playing, so take that for what it is

If he doesn't play, this will be Pavelski's third game missed after suffering an upper body injury .

Ben Bishop will start in goal for the Stars, with the potential lineup against the Canadiens as follows: