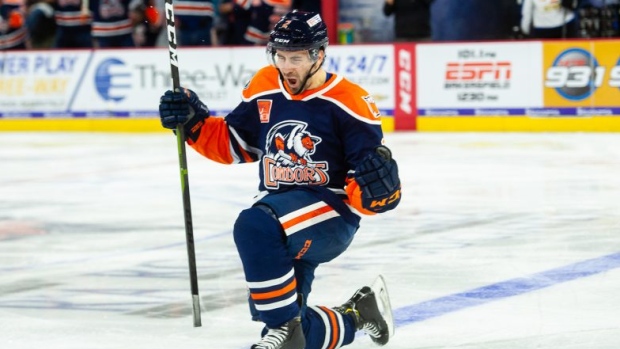 The Edmonton Oilers have recalled Evan Bouchard from the Bakersfield Condors ahead of tonight's game against the Boston Bruins. The Oilers have also placed Oscar Klefbom on injured reserve and have assigned Markus Granlund to the Condors.

Coach Dave Tippett says in the following video that Bouchard is projected to be playing in upcoming games, but he won't be available tonight to play against the Bruins.

"The more he plays, the better he plays. He's ready for this challenge."

Coach Tipp discusses Jones' workload increasing with injuries on the blueline & more ahead of tonight's #Oilers vs. Bruins matchup pic.twitter.com/Yn3R2PQKze

Bouchard played seven games for the Oilers in their 2018-19 season where he scored his first career goal in an October 2018 game against the Washington Capitals. The Oilers were able to call him up and make space for him on the roster after placing Klefbom on injured reserve and assigning Granlund to the Condors.

Klefbom is expected to be out for two to three weeks with a shoulder injury. He's played 59 games for the Oilers so far this season and has recorded five goals and 28 assists. He was drafted by the Oilers in 2011 as the 19th overall pick and has played a total of 375 games over the course of seven seasons with the team.

Granlund has been assigned to the Condors after playing 32 games with the Oilers this season. In the games he has played, he has recorded three goals and an assist. He played for the Vancouver Canucks for the past four seasons before being traded to the Oilers and has also played for the Calgary Flames where he was drafted in 2011 as the 45th overall pick in the second round.

Canadiens have recalled defenseman Christian Folin from the AHL Laval Rocket. He will join the team in Washington today.#GoHabsGohttps://t.co/5LGNkAQeiP

This comes after he was sent down to the AHL team just two days ago.

Folin has played a total of seven games for the Habs this season, 26 in total over the past two years. He scored his first goal as a Hab on Feb. 4 in their game against the New Jersey Devils and has recorded a total of five assists for the team in the past two seasons. Prior to being traded to the Habs, Folin played for the Philadelphia Flyers, the Los Angeles Kings and the Minnesota Wild, giving him 235 games of NHL experience where he has registered eight goals and 36 assists.

Folin will be joining the Habs in Washington for their game against the Capitals Thursday night.

Defenceman Zach Trotman has been recalled by the Pittsburgh Penguins Wednesday morning on an "emergency basis" after John Marino was placed on injured reserve.

The Penguins have recalled defenseman Zach Trotman on an emergency basis from the @WBSPenguins.

John Marino has been placed on injured reserve.

Marino went through facial surgery Monday after taking a shot to the face in the Penguins' Feb. 6 game against the Tampa Bay Lightning. As a result, Trotman was recalled from AHL team Wilkes-Barre/Scranton Penguins to skate in his place.

Trotman has played in five games with the Penguins this season and has recorded a plus-1. Last season he played 13 games for the Pittsburgh team and recorded a plus-4. Trotman has also had previous experience playing for the Boston Bruins and has played a total of 88 NHL games, registering three goals and 10 assists.

It was also announced Wednesday afternoon that Evgeni Malkin missed the Pens' practice today due to illness. He missed yesterday's game against the Toronto Maple Leafs for the same reason.

Evgeni Malkin is absent from #Pens practice after being a late scratch for last night's game against Toronto due to illness. All other expected players are on the ice. -MC

Malkin will still be travelling to Toronto with the possibility that he may be able to play in Thursday's game. So far, he has played 44 games this season and has recorded 18 goals and 40 assists, and is plus-11.

The Columbus Blue Jackets have assigned goaltender Joonas Korpisalo to a conditioning assignment and forward Kole Sherwood to the Cleveland Monsters.

Korpisalo has been sitting on the injured reserve list ever since he sustained a tear in his knee in the Dec. 29 shootout against the Chicago Blackhawks. He's been out for a total of 22 games so far, but prior to his injury Korpisalo was carrying a .913 save percentage and has had 31 starts with the team. He was drafted in the third round by the Blue Jackets as the 62nd overall pick, making this Korpisalo's fifth season in Columbus.

Sherwood made his NHL debut with the Blue Jackets on Feb. 16 which made him the first Columbus-born player to play in a regular season game for the team. He's played three games for the Blue Jackets this season and 34 for the Monsters where he has registered eight goals and three assists.

Forward Roy has previously played 19 games for the Golden Knights this season where he's scored three goals and made three assists. He's also had experience playing for the Carolina Hurricanes for seven games.

Defenceman Whitecloud also played for the Golden Knights this year and had a plus-3 during the seven games he played. He's also played 35 games in the AHL this season where he has recorded two goals and five assists.

Schuldt played in a Golden Knights game in the 2018-19 season where he recorded an assist. He previously played in the USHL for three seasons and the NCHC for another four before switching over to play for the Wolves in the AHL.