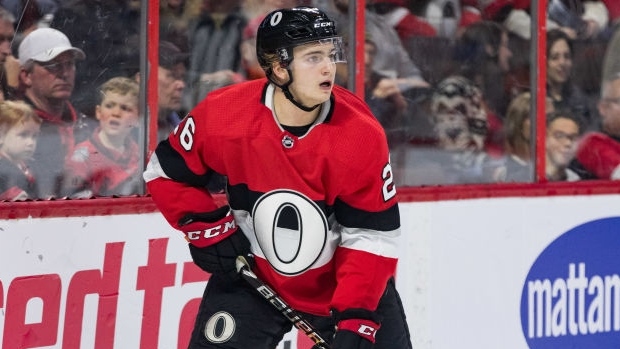 The Senators have recalled defenceman Erik Brannstrom from the team's taxi squad, it was announced Sunday morning.

In a corresponding move, defenceman Braydon Coburn has been re-assigned to the taxi squad.

Ottawa will take on the Calgary Flames Sunday evening.

D Erik Brannstrom has been recalled from the team's taxi squad.

In a corresponding move, D Braydon Coburn has been re-assigned to the taxi squad.

Mikko Koskinen was in the starter's net at practice on Sunday according to TSN's Ryan Rishaug.

The Oilers will take on the Ottawa Senators on Monday. The Sens will be coming off a back-to-back as they play the Calgary Flames Sunday night.

Koskinen in the starters net at practice today.

The Canadiens have recalled forward Laurent Dauphin and defenceman Xavier Ouellet from the AHL's Laval Rocket, it was announced Sunday morning.

Both players will join the team's taxi squad in preparation for their trip out West, which sees the Habs take on the Vancouver Canucks, Calgary Flames and Winnipeg Jets two times apiece over a six-game stretch.

The Canadiens have recalled forward Laurent Dauphin and defenseman Xavier Ouellet from the Laval Rocket. Both players will join the team’s Taxi squad in preparation for the trip to Western Canada.

Defenceman Jake Gardiner will return to the lineup Sunday against the Florida Panthers after missing the past five games with an upper-body injury, according to head coach Rod Brind'Amour.

Forward Teuvo Teravainen is a game-time decision, while James Reimer will get the start in net, tweets team reporter Michael Smith.

After missing five games with an upper-body injury, Jake Gardiner will be back in #Canes lineup this evening, according to head coach Rod Brind'Amour. Teuvo Teravainen is a game-time decision. James Reimer gets the start in net.

Carlo was taken to hospital following a hit from Tom Wilson Friday night. The blue liner was released from hospital on Saturday while Wilson was suspended seven games by NHL Player Safety.

The Blues have placed defenceman Colton Parayko on injured reserve with an upper-body injury.

#stlblues announce Parayko has been placed on IR.

He was injured on Feb. 15 and has been out ever since.