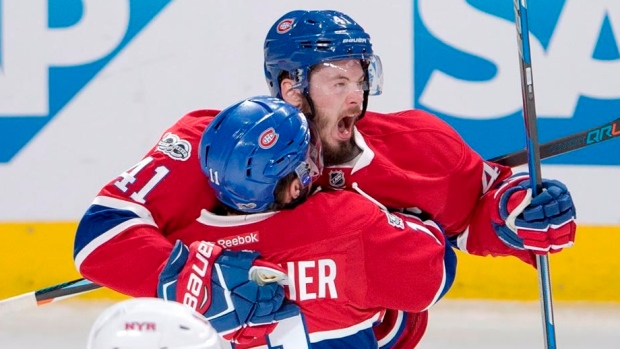 Montreal Canadiens forwards Brendan Gallagher and Paul Byron practiced in non-contact  jerseys on Wednesday morning, according to TSN's John Lu. Head coach Dominique Ducharme he's neither play will play Thursday against the Anaheim Ducks but have a chance to play this weekend.

Byron, 32, has not played this season due to offseason hip surgery. He scored five goals and added 11 assists in 46 regular season games during the 2020-21 season.

Gallagher, 29, has not played since Dec. 30 due to a lower-body injury. The veteran forward has recorded four goals and six assists in 25 games this season.

Goaltender Carey Price continues to make progress as he rehabs a knee injury. However a date for his return has yet to be determined.

Continues to rehab his knee in the gym. He is making progress, but a date for his return to the ice has yet to be determined.

Forwards Joel Armia and Cole Caufield (COVID protocol) will continue to train in Wisconsin and must wait until Jan. 28 before they are able to return to Canada. Ducharme says it's possible Armia and Caufield could be available this weekend but is not sure if they will play right after becoming eligible on Friday.

Both players continue to train in Wisconsin and must wait until January 28 to return to Canada.

Forward Christian Dvorak (therapy day) is not practicing on Wednesday.

Canadiens goalie Samuel Montembeault took part in full practice on Wednesday despite dealing with a wrist injury. During his post-practice availability, Montembeault says he hopes to play this week and feels like his wrist is progressing.

Forward Jonathan Drouin sustained an upper-body injury and will be out indefinitely, the team announced. He continues to be evaluated by the team's medical staff.

Suffered an upper-body injury and will be out indefinitely. He continues to be evaluated by team medical staff.

Defenceman Joel Edmundson (back) continues to work off-ice but there is no timeline for his return.

Keefe: "The progress has been steady ... He'll have his neuro psych test today, which will determine his status going forward"@TSN_Edge #BellLetsTalk https://t.co/WwSkkp3kTW

Head coach Bruce Boudreau says that goaltender Thatcher Demko is still in the league's COVID-19 protocol and won't make the initial part of the team's upcoming road trip. Demko did skate this morning with players that have already had COVID.

Boudreau says Demko is still in protocol and won’t make the initial part of the trip. Skated this morning with players who have already had Covid. Martin and DiPietro will make the trip and Halak will meet them there. Burroughs LBI - out until after ASB. #Canucks

Defenceman Ty Smith (upper-body injury) joined the team for practice while Nico Hischier and P.K. Subban were absent from practice for maintenance days.

#NEWS: Ty Smith (upper-body) has joined the team for practice. Nico Hischier and P.K. Subban are not on the ice for maintenance days. Michael McLeod also absent.

Both players will travel with the Devils on the teams upcoming three-game road trip.

The Predators have re-assigned forward Cole Smith and defenceman Matt Tennyson to the taxi squad.

The #Preds have reassigned forward Cole Smith and defenseman Matt Tennyson to the taxi squad.

Forward Anton Blidh will return to the Bruins' lineup on Wednesday against the Colorado Avalanche. The 26-year-old missed the past two games with an upper-body injury. He has two goals and six assists in 20 games this season.

Anton Blidh will return to the #NHLBruins lineup when they take on the Avalanche tonight in Denver.