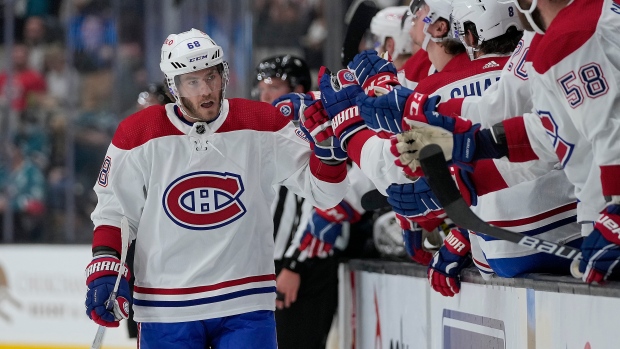 Hoffman has been sidelined since Nov. 13 after suffering an upper-body injury against the Detroit Red Wings.

He has four goals and seven points in 13 games this season.

Dominique Ducharme confirms that Mike Hoffman will return to play. Mattias Norlinder will dress too. #GoHabsGo

Marner collided with defenceman Jake Muzzin while participating in a drill during Friday's practice and left the skate for precautionary reasons.

The Senators have recalled defenceman Dillon Heatherington from AHL Belleville.

He has appeared in three games with Ottawa this season. In the AHL, he had a goal and seven assists in 15 games.

Injured forward Nikita Kucherov skated on his own off to the side near the end of Tampa's skate Saturday, tweets The Athletic's Joe Smith.

Nikita Kucherov skated off to side near end of @TBLightning skate today. Jon Cooper said in Boston nothing new triggered in his timeline, still not expected before the New Year.

Head coach Jon Cooper told reporters recently that nothing new has emerged in his timeline and he is still not expected to be ready until the new year as he recovers from a lower-body injury.

The 28-year-old has one goal and three assists in three games so far this season for the Bolts.

Bear is expected to take warmups and will play if all goes well.