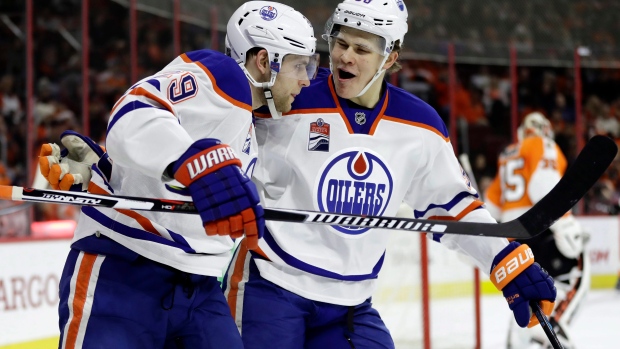 The Oilers have assigned fourth overall pick Jesse Puljujarvi to the American Hockey League and have recalled winger Anton Slepyshev. The 18-year-old Finn has just one goal and seven assists over 28 games this season with the Oilers. In other news, Edmonton placed goalie Jonas Gustavsson on waivers. - Team Tweet

Forward Paul Byron will make his return to the lineup Monday against the Capitals after sitting out one game due to an upper-body injury. Head coach Michel Therrien says Andrew Shaw, Andrei Markov and Alex Galchenyuk are close, but remain day-to-day. - John Lu, TSN

Troy Brouwer (broken finger) says he is ahead of schedule for his return. Brouwer was week-to-week after breaking his finger just before the Christmas break. - Calgary Sun

Curtis McElhinney has been placed on waivers by #CBJ. Markus Hannikainen is reassigned to Cleveland.

Aleksander Barkov is still three weeks away from returning to action, according to head coach Tom Rowe. Barkov has been out since Dec. 28 when he suffered a lower-body injury against the Toronto Maple Leafs. Seth Griffith, who's missed the last two contests with a concussion, might be able to return with the week. - Fort Lauderdale Sun-Sentinel

Injured goalie Matt Murray is likely to return to practice this week after being sidelined since Dec. 28 with a lower-body injury. - Pittsburgh Post-Gazette

Forwards Tim Wilson (lower-body) and T.J. Oshie (upper-body) are both questionable for Monday's game against the Montreal Canadiens. The team has called up winger Paul Carey from the minors to help fill the possible void. - CSN Mid-Atlantic