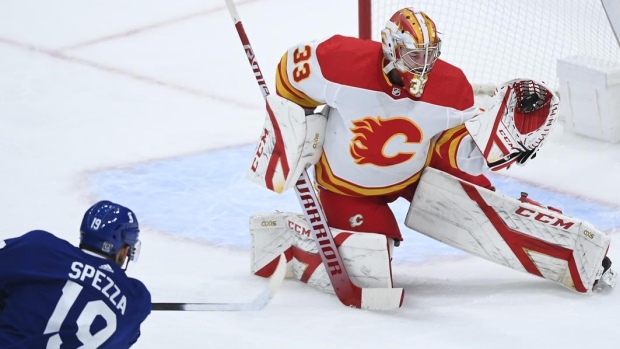 Toronto Maple Leafs head coach Sheldon Keefe confirmed on Tuesday that newly acquired goaltender David Rittich will make his debut for the team against his former club, the Calgary Flames.

Jack Campbell will serve as the backup for the Leafs against the Flames.

Rittich was on the ice erlier Tuesday for his first skate with the Maple Leafs.

Jacob Markstrom is expected to start against the Maple Leafs.

Lines at Flames skate in Toronto

Defenceman Nikita Zaitsev was absent from the team's skate on Tuesday.

Newly acquired forward Anthony Mantha is expected to make his debut for the Washington Capitals against the Philadelphia Flyers.

CAPS TODAY: Newly acquired forward Anthony Mantha is scheduled to make his Capitals debut tonight. Mantha recorded 21 points (11g, 10a) in 42 games with the Red Wings this season. More info on Mantha and the Capitals, as well as Caps Clips at https://t.co/HecIC0ECg1 pic.twitter.com/lgpXSzpyLI

Mantha was on the ice with the Capitals Tuesday, working on the team's power play unit.

Ilya Samsonov will get the start when the Capitals face the Philadelphia Flyers tonight.

The Bruins have confirmed that both Taylor Hall and Mike Reilly will debut for them against the Buffalo Sabres on Tuesday.

Hall, Reilly, Miller are in vs. Sabres

Frederic skated, could be available Thurs.

The Bruins also had their deadline additions on the ice Tuesday, with Taylor Hall, Curtis Lazar and Mike Reilly taking part in the morning skate.

Devils captain Nico Hischier will return to the team's lineup against the New Jersey Devils tonight.

The 22-year-old has been sidelined since Feb. 27. He has two goals and three points in five games this season.

🔥The Captain is back 🔥

It’s happening! Nico Hischier will return to the #NJDevils lineup when the Devils host the Rangers tonight.

Igor Shesterkin will get the start in goal for the New York Rangers against the New Jersey Devils on Tuesday, the team announced.

The Rangers also announced on Tuesday that they have signed defenceman Zac Jones to an entry-level contract.

The 20-year-old appeared in 29 games this season for the UMass Minutemen this season, contributing nine goals with 15 assists.  He was selected in the third round, 68th overall, of the 2019 NHL Entry Draft.