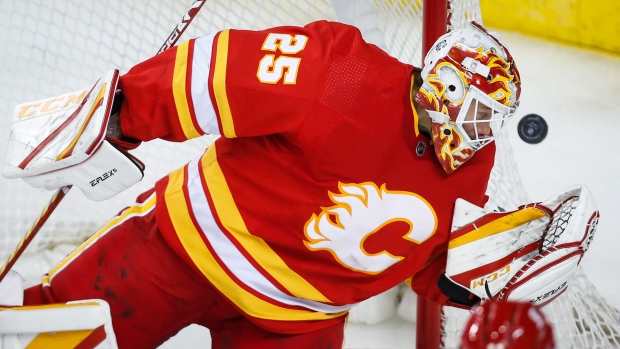 Calgary Flames goaltender Jacob Markstrom participated in a goal session prior to main practice on Sunday. He remains day-to-day with an upper-body injury.

The Canucks practice on Sunday ahead of travelling to Winnipeg for a two-game set with the Jets. Here are their lines.

Samsonov, 24, returns to the active roster following a conditioning assignment with the AHL's Hershey bears. Samsonov has not played since Jan.17 following a stint on the NHL's COVID Protocol list. He is 1-0-1 with a 3.36 goals against average and .868 save percentage in two games this season.

Devils' captain Nico Hischier will not play Sunday against the Capitals. Per head coach Lindy Ruff, the 22-year-old is day-to-day and still being evaluated after taking a puck to the face in Saturday's los to the Capitals.

Nico Hischier will be out today against the Capitals. He's still being evaluated, per Lindy Ruff. Ruff says he's day-to-day for now.

Hischier has two goals and one assist in five games this season.

The team has also assigned defenceman Connor Carrick to the taxi squad from the AHL and recalled forward Mikhail Maltsev from the taxi squad to the active roster. Maltsev will play in today's game against the Capitals.

#NEWS: We have assigned D Connor Carrick from Binghamton (AHL) to the taxi squad.

We have recalled F Mikhail Maltsev from the taxi squad to New Jersey. pic.twitter.com/V4Do32698o

The Bruins announced that goaltender Tuukka Rask will get the start in goal Sunday against the New York Rangers. The team also announced that forwards Greg McKegg and Karson Kuhlman, and defenceman Steven Kampfer will be in the lineup.

Greg McKegg and Karson Kuhlman join the lineup up front. Steven Kampfer goes in on defense.

Anders Bjork, Chris Wagner, and John Moore will be out.

Tuukka Rask gets the start in goal. pic.twitter.com/lBStN9dwcX

Anders Bjork, Chris Wagner, and John Moore will be out of the lineup.

The Columbus Blue Jackets have recalled forwards Ryan MacInnis and Zac Dalpe from the Cleveland Monsters of the AHL.

MacInnis, 25, has recorded one assist in 10 games with the Jackets this season. Dalpe, 31, has not played a game in the NHL this season. He has 12 goals and 13 assists in 141 career games.

Predators defenceman Mark Borowiecki will not play Sunday and is day-to-day with an upper-body injury.

#Preds defenseman Mark Borowiecki will not play this afternoon and is day-to-day with an upper-body injury. #CBJvsNSH

The Predators did not have a morning skate on Sunday. Below is the team' projected lineup based on Saturday's game. The team has not announced a starting goaltender for Sunday afternoon's game.

The Red Wings have recalled defenceman Alex Biega from the taxi squad, the team announced Sunday.

UPDATE: Defenseman Alex Biega has been recalled from the #RedWings taxi squad. pic.twitter.com/JQRHPI6r9e

Penguins coach Mike Sullivan announced that Casey DeSmith will start in Sunday's game against the Islanders.

Forward Jack Eichel (lower body) is a game-time decision for Sunday afternoon's game against the Philadelphia Flyers, per Sabres head coach Ralph Krueger. Brandon Davidson and Matt Irwin will enter the lineup in place of Jacob Bryson and Collin Miller.

Brandon Davidson and Matt Irwin will enter the lineup in place of Jacob Bryson and Collin Miller.

"It's not for any reason other than some fresh energy coming into the D corps," Krueger says.