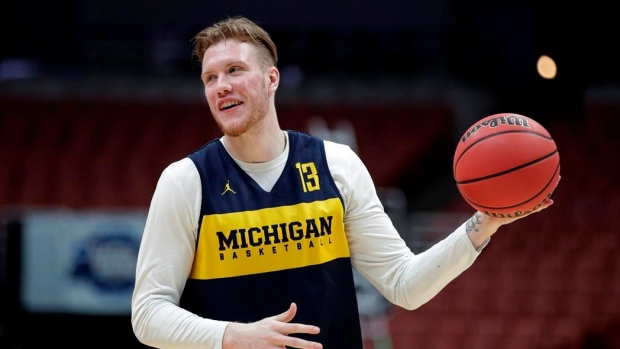 With only a few days remaining before the NBA draft, Iggy Brazdeikis enjoyed a reunion of sorts when he worked out for the Cleveland Cavaliers.

That meant a chance to catch up with John Beilein.

"It was so cool. It honestly kind of felt like home, seeing him there," Brazdeikis said. "It just felt really good, playing in front of him again, and kind of just getting to talk to him and catch up with everything."

It's no surprise that Brazdeikis welcomed a little familiarity. There's no telling what the 20-year-old should expect in Thursday night's draft, and preparing for it can be a grind. It's a time when a player's life is changing quite a bit, but Brazdeikis will find out his next step soon enough.

"Obviously, you always want to be higher in the draft, but at the end of the day, it's about getting that right fit," he said in a phone interview Tuesday.

Brazdeikis left Michigan after just one season, part of an off-season of upheaval for the Wolverines. Charles Matthews and Jordan Poole also left early for the draft, but the most jarring change was the departure of Beilein, who coached Michigan back to relevance over the past dozen years. Beilein left to take the coaching job with the Cavaliers, and the Wolverines replaced him with Juwan Howard.

So when Brazdeikis worked out for Cleveland on Monday and had a chance to talk to Beilein, things were different.

"He cares for all his players. But you know, there was a little bit of a difference in the talk, in that it was kind of more relaxed," Brazdeikis said. "We could just talk. ... I'm not his college athlete anymore, so we were just able to talk and have a great, friendly conversation."

The 6-foot-7 Brazdeikis led Michigan with 14.8 points per game last season, and his impact was immediate. He scored in double figures in nine of his first 10 college games, including an 18-point effort in a blowout win at Villanova, and 24 points in a home victory over North Carolina. Brazdeikis was a confident player all season, but those two games early on really gave him a boost. It was clear he could compete against good competition.

He fit into Michigan's offence nicely, shooting 39 per cent from 3-point range, and the Wolverines eventually made it to the Sweet 16.

Beilein left last month to go to the Cavaliers. Brazdeikis said his phone was "blowing up" the morning the news broke. He says he wondered if he might've missed his flight to the NBA's draft combine, which was around the same time.

The combine turned out to be a positive experience for Brazdeikis.

"That was really great. That was the first time I actually felt like a professional," Brazdeikis said. "Got to wear suits ... and have those meetings with those NBA teams, which was a lot of fun for me."

The pre-draft process had some tough moments as well. Brazdeikis was at the workout where Matthews, his college teammate, tore his anterior cruciate ligament.

"It definitely broke my heart and was one of the saddest moments of my career," Brazdeikis said. "He's a real close friend of mine. It's just heartbreaking. I know for a fact that he's going to come back even stronger."

Brazdeikis is hoping for the best for Matthews, and he says he's kept in touch with Poole. All any of them can do Thursday is wait. A mock draft at si.com projects Brazdeikis to go late in the second round.

Brazdeikis, who is from Ontario, says he'll be watching the draft in the Toronto area with family and friends.

"I feel really good. It's kind of funny. I actually feel kind of calm right now," he said. "Just being on the road and working out for 13 NBA teams, and just working hard every single day — it's just kind of relaxing to be home right now. ... With the draft coming up, I'm so excited, and I'm super pumped up."