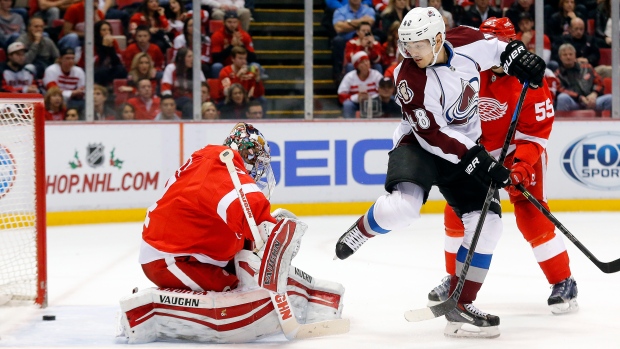 DETROIT - The Colorado Avalanche had the luxury of calling on a six-time NHL All-Star for the ninth round of a shootout.

Jarome Iginla scored in the tiebreaker to lift the Avalanche to a 2-1 victory over the Detroit Red Wings on Sunday night.

Iginla got a wrist shot past Petr Mrazek, who had turned away six straight Avalanche shooters. Nathan MacKinnon and Matt Duchene also scored in the tiebreaker as Colorado ended a three-game road trip with five points.

Iginla said he thought too many prior shooters were trying to fake their way past Mrazek so he took a more direct approach when it was his turn.

"No one had really shot," he said. "I just wanted to come in and pick a spot."

Gustav Nyquist and Tomas Tatar had shootout goals for Detroit, which has dropped six in a row, four of them in tiebreakers. The Red Wings fell to 1-7 this season when the game goes to a shootout.

Detroit had a 22-12 shots advantage five minutes into the third period and finally cashed in when Pavel Datsyuk wristed a power-play shot past Avalanche goalie Calvin Pickard for his 13th goal.

The Avalanche tied it with 4:15 left in regulation when Erik Johnson scored on the power play for his eighth of the season. Colorado was coming off a 5-1 win at Buffalo on Saturday night.

"Defensively, even if we gave up 30 shots, it was back-to-back games," Avalanche coach Patrick Roy said. "I thought, under the circumstances, we performed pretty well."

Mrazek had 22 saves through overtime. Pickard finished with 34.

"I think we created 35 shots," Detroit captain Henrik Zetterberg said. "There's a lot of chances that we thought the puck was going in but (Pickard) came up and made the saves."

Colorado had the best chance in overtime when Brad Stuart found himself 10 feet from Mrazek but the goalie made a pad save.

Colorado's Maxime Talbot received a high-sticking, double-minor penalty late in the first period, but the Red Wings were unable to take advantage of the power play.

Red Wings coach Mike Babcock put Datsyuk back together with former linemate Zetterberg, who got his 22nd assist on the third-period goal. The duo skated with wing Justin Abdelkader.

The line nearly got a second goal late in the third when Zetterberg got a pass from Datsyuk near the net but shot wide. The duo had a combined 11 shots in regulation and overtime.

Four of Detroit's last five home losses have been in shootouts. Babcock admitted he was getting tired of seeing his team get better chances in regulation before heading to the tiebreaker.

"We need to find a way to score goals," he said. "We had lots of opportunities and didn't finish.

"We need to find a way to get the second point. Two adds up better than one."

NOTES: Detroit goalie Jimmy Howard was scratched due to a lower-body injury he suffered during Friday's 2-1 loss to the New York Islanders. The Red Wings called up Tom McCollum from Grand Rapids of the AHL to back up Mrazek. ... Colorado goalie Semyon Varlamov missed his sixth straight game with a groin injury. ... Red Wings forward Stephen Weiss missed his fourth straight with a separated shoulder. He was eligible to come off injured reserve on Sunday.