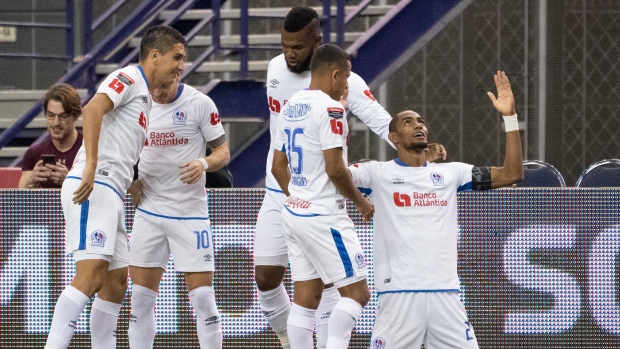 MONTREAL — The Montreal Impact learned the hard way that CONCACAF does not use video review.

The Impact felt they should have been awarded a penalty kick late in a 2-1 defeat to C.D. Olimpia of Honduras in the opening leg of the Champions League quarterfinal on Tuesday.

“It’s hard to speak about that in the heat of the moment,” said midfielder Saphir Taider. “We don’t want to focus on it too much. It’s frustrating. It all happened so quickly. We had to regain our composure after that.”

It appeared the Impact (0-1-2) were awarded a penalty in the 81st minute when a header by substitute Anthony Jackson-Hamel went off Maylor Nunez's arm in the box.

Referee Adonai Escobedo initially pointed to the spot, to the roaring delight of the 20,243 fans at Olympic Stadium. But after a lengthy discussion with the assistant referee, Escobedo changed his decision.

Unlike Major League Soccer and several top European leagues, there is no video review (VAR) in CONCACAF.

Thierry Henry, who was handed his first defeat as Impact head coach, refused to comment on the no-penalty decision.

“I’m not talking about the refereeing,” he said.

Toronto FC forward Jozy Altidore chimed in on social media. “No VAR is a joke,” he tweeted after the game.

“The officials have to improve as the competition improves. It’s 2020 and teams still gettin CONCAF’D. It’s ridiculous,” he said in another tweet.

The return leg is next Tuesday in Honduras, where Montreal will need to win and score at least two goals to stay alive in the competition.

Down 2-0, Henry made a tactical change at halftime that provided an offensive spark. He went from a 5-3-2 formation to a 4-3-3 and brought Orji Okwonkwo into the game.

The move paid instant dividends when Taider scored a sensational goal from 35 yards out in the 47th minute. The midfielder took a bouncing ball from Okwonkwo in stride and fired a perfectly weighted shot that dipped past the diving goalkeeper.

Taider could have tied the game in the 70th with a free kick on the edge of the penalty box but he sent the ball over the bar. Another opportunity in the 76th was wasted when Jackson-Hamel, unmarked in the box, sent his header wide.

“I’m frustrated,” said Taider. “I just looked over our stats. We dominated them everywhere. We had so many chances. They scored on two chances, two mistakes from us. It leaves a bitter taste in my mouth."

Olimpia (1-0-2) goalkeeper Edrick Menjivar pulled his groin on a goal kick early in the match and was replaced by substitute 'keeper Alex Guity. The defending Honduran champions scored off Guity's ensuing goal kick in the 15th minute.

The ball fell to Leonardo Garrido, who headed it into the path of Jerry Bengtson. On poor coverage by rookie Luis Binks, Bengtson snuck behind the defenders and shot the ball with his first touch. Clement Diop got his hand on it, but not enough.

Instead of sitting back, the visitors kept looking for holes in the Impact back line, especially on the counter.

That second crucial away goal came in the 41st minute. After a poorly taken Impact free kick, Olimpia marched down the field with speed. Jorge Benguche evaded a tackle from Zachary Brault-Guillard with a dummy before beating Diop far side.

“We can’t concede the two goals we did,” said Henry. “Those were schoolyard errors. When you’re trying to come back from two goals down, it’s a big challenge. It’s a knockout game and you’re down 2-0, everything goes quicker.”

It was only the second loss for Montreal on home soil in the Champions League (9-2-3).

Olimpia has the chance to eliminate a second MLS club after taking care of the Seattle Sounders in the round of 16.

“It’s not over,” said Olimpia coach Pedro Troglio through a translator. “There’s 90 minutes to come next week in Honduras. They will be hard those minutes. We need to keep playing the way we did.

“There is still a lot of work to be done.”

The winner of the two-legged aggregate series will face New York City FC or Mexico's Tigres in the semifinal next month.