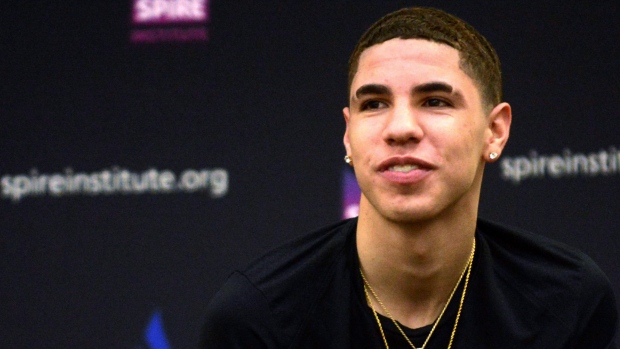 SYDNEY, Australia — LaMelo Ball's bone bruise on his left foot is expected to keep him out of the Illawarra Hawks lineup for the remainder of the National Basketball League season in Australia.

The 18-year-old American, who joined Illawarra as part of the NBL's Next Stars program, is expected to be a first-round pick in this year's NBA draft.

Ball averaged 17 points, seven assists and seven rebounds in 12 games. He averaged 31 minutes of playing time a game for the last-place Hawks, but hasn't played since sustaining the injury in early December. The regular season ends in mid-February.

The club said the point guard will continue his rehabilitation to include court-based activity under the care of the Hawks' medical team.

"It's important that he makes a return to full fitness ahead of the NBA draft and we will do everything we can to support that and his aim to become the No. 1 pick," NBL commissioner Jeremy Loeliger said Friday.

"LaMelo has enjoyed an excellent season and there is no doubt his draft prospects have been firmly enhanced by his time playing in the NBL."

Ball helped draw big crowds, including a league-record 17,514 for the Hawks' November game against the Sydney Kings in Sydney.

While his shooting percentage wasn't great in his first few games, Ball got better as the season progressed. He took on extra responsibilities after former NBA guard Aaron Brooks left the club with a torn Achilles tendon in late October.

Ball became the first player in the 40-minute NBL era to record a triple-double in consecutive games, in what turned out to be his last two appearances for the Hawks.

Ball had 32 points, 13 assists and 11 rebounds in his second-last game against Cairns, in the process becoming the youngest player in NBL history to achieve a triple-double.

He followed up with another strong performance in his last game, scoring 25 points, taking 12 rebounds and making 10 assists against the New Zealand Breakers.

He recently donated a month of his salary, which was not disclosed, to a national relief fund in aid of wildfire victims in Australia.