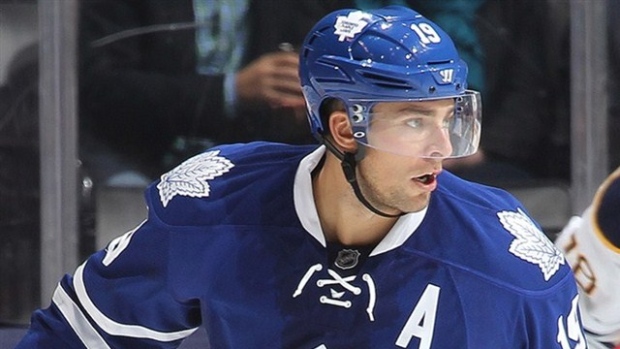 TORONTO - When a slim glimmer of hope remained that the Toronto Maple Leafs could get back into contention late last month, Joffrey Lupul decided he couldn't wait any longer to return from injury. He considered it "do-or-die time" and rushed back.

The result was just two points in six ineffective games before the organizational decision was made to rest Lupul. He has missed three more games since as the struggling Leafs understandably take a wait-and-see-and-wait-some-more approach to his nagging lower-body injury.

"It was just obviously the situation differs when it's kind of that desperation playoff time," Lupul said Wednesday. "When the losses started to pile up a little bit and it became obvious we weren't going to the playoffs, we decided with the training staff and the coaches it was best just to shut it down for a couple weeks and try and get it closer to 100 per cent, not go out there and put myself at risk or take ice time from someone who's working hard to go out there and play."

With the Leafs 14th out of 16 teams in the Eastern Conference, there's no reason to press the oft-injured, hard-luck Lupul back into action. Management knows what it has in the 31-year-old winger who can be productive when healthy and on the ice.

Lupul said after taking part in practice Wednesday that he was feeling better. But he cautioned that the injury would probably linger for the rest of the season.

Because of that and the team's approach to look to the future, Lupul's return isn't just up to him.

"When it's a decision to take someone out of the lineup or put someone back in, it doesn't come down to me just saying, 'I'm not feeling well enough to play,' or 'I'm feeling good enough to play,'" he said. "It's the player, the training staff, the coach and probably the general manager at some point. These decisions are made as a whole."

The same could go for defenceman Dion Phaneuf, who went from appearing close to returning from a hand injury to not even skating.

"I think that he was practising and it wasn't getting better," interim coach Peter Horachek said. "They did some more tests and scans and they found other things that made (his absence) longer."

Toronto's captain has already missed 10 straight games with a hand injury and won't play Friday at the Carolina Hurricanes or Saturday against the Winnipeg Jets. Centre Trevor Smith is also out for those two games with a lower-body injury.