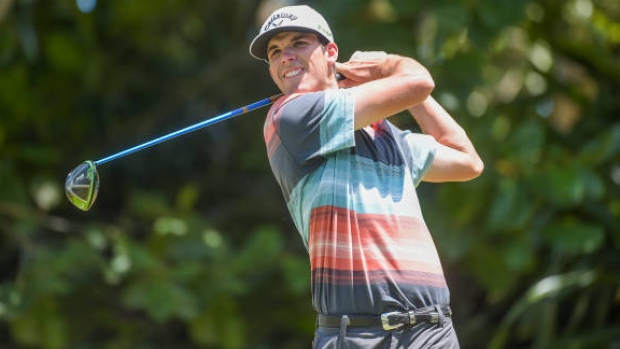 LITCHFIELD PARK, Arizona—Ten days ago, Tee-K Kelly wasn’t sure he would be able to play in this week’s Mackenzie Tour – PGA TOUR Canada Qualifying Tournament at The Wigwam’s Gold Course. Six stiches on the big toe of his right foot left him questionable. Monday night, a doctor removed the stitches, and Kelly answered the bell Tuesday morning with a 3-under 69. In Wednesday’s second round, under more adverse conditions as the wind blew steadily the entire day, Kelly shot a tournament-best, 7-under 65 to seize control of the tournament by four shots over Sam Triplett. Another six players are five shots behind Kelly’s leading pace.

“I’m very grateful that I’m able to play right now. A week ago, I hadn’t even swung a golf club. I didn’t know if I was going to be able to play this week,” said Kelly, alluding to the watercraft accident he had in Florida when he stepped on an oyster and severely cut his toe. “I had a good mindset for this week. I’m just really grateful to be out here. It’s weird to be out here. I haven’t played many four-round events lately.”

For the second consecutive day, Kelly began his round with birdies at the first and second holes. He tacked on birdies at No. 4, chipping to a foot. A No. 7, he drained one from seven feet and made a 15-footer at No. 9. Kelly turned to the back nine in 31 strokes.

“I feel like I play a fair amount of tournaments where (No.) 1 is a par-5, and I like when the opening hole is a par-5 because there is something that eases your mind when you’re 1-under through one, “ he said, apparently the Gold Course playing into his strategy. “But if you par that first hole, I’m like, man, I’ve already wasted an opportunity. So, good birdies both days.”

At No. 10, Kelly kept the momentum going, pouring in a 25-footer for another birdie. “I was cruising at that point. I was feeling good,” said the Wheaton, Illinois, native who still lives in Chicagoland. Kelly only made one more birdie the rest of the way but was pleased with the way his first 36 holes have unfolded.

“I’m pretty happy. I maxed out my round pretty well. I had a good (birdie) chance on 15 (that he missed from right around eight feet). The pins are pretty tough on the last couple of holes. I gave myself good looks. I just didn’t make any of the longer putts,” he explained.

Triplett improved on his opening 70 with a 4-under 68, closing his round with three birdies and two pars.

Kelly and Triplett will join Kevin Velo as the last group in the third round. They tee off at 12:55 p.m. PDT.