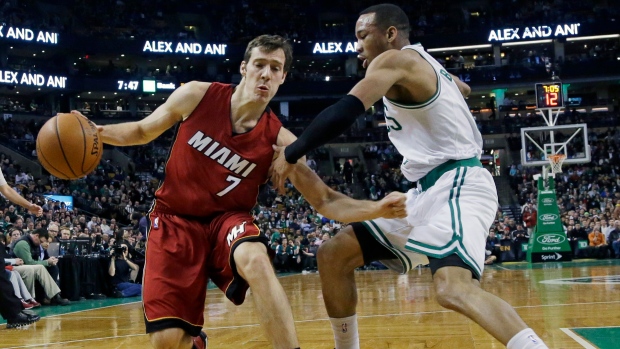 BOSTON - The Miami Heat were coming off a difficult loss at Milwaukee, and they were missing three key players due to injuries from the game against the Bucks.

Goran Dragic knew what he had to do.

Dragic had 22 points and seven assists, and the banged-up Heat beat the Boston Celtics 93-86 on Wednesday night.

"When one of the main guys is out, all of the other guys have to step in," he said. "That was my mentality before the game that I have to carry this team. We accomplished that. We won."

Miami played without Dwyane Wade, Hassan Whiteside and Chris Andersen, but bounced back quite nicely from Tuesday night's disappointing 89-88 loss at Milwaukee. The Heat blew a 14-point lead in the final 6 1/2 minutes against the Bucks.

"The example he set tonight, constantly hitting the floor for loose balls," Heat coach Erik Spoelstra said of Dragic, "it set the tone and the example for everybody else. That's probably what would decide this game. It was pretty ugly there in the fourth, but those loose balls and the extra rebounds where what really decided it."

Miami (33-38) has won four of six and is seventh in the Eastern Conference playoff race.

Jae Crowder scored 16 points and Avery Bradley had 12 for the Celtics, who remained in the East's eighth and final playoff position.

"We came out real flat and they took advantage of that," Boston guard Marcus Smart said.

Wade, who averages a team-high 21.6 points, was sidelined by a swollen left knee. Whiteside received 10 stitches on his right hand after he was cut in the second quarter against the Bucks, and Andersen was out with a bruised left calf.

But Miami led by 17 at halftime against Boston and carried an 82-62 advantage into the final period.

"In the fourth quarter they played with great emotion and hard as heck and got us back into it, but then we just didn't make very good decisions or play with poise late, which sometimes happens when you're trying to mount a furious comeback," Boston coach Brad Stevens said.

Just like in Tuesday's game against Milwaukee, the Heat became passive in the fourth, taking their time with most offensive possessions, and the Celtics mounted a charge.

"We were fantastic the first three quarters," Dragic said "I don't know if it was fatigue or we were thinking it would be like the last one."

Dragic scored 17 points in the first half to help Miami to a 57-40 lead at the break. The Heat finished the second quarter with a 9-2 run.

Dragic and Boston's Isaiah Thomas were teammates in Phoenix, but both were dealt at the trade deadline after being part of a messy three point-guard mix with the Suns.

Heat: Spoelstra was still bothered watching tape of Tuesday's loss. "I went over it on the plane last night, that's like kicking yourself in the gut over and over and over," he said. "Then waking up in the morning when you feel worse and go through that process again."

Celtics: Thomas returned after missing eight games with a bruised lower back. Stevens felt he was searching for his game. "Hopefully that was just a rhythm thing and not how he's feeling," Stevens said. "That's what I want to know." Thomas finished with four points in 20 minutes.

Haslem, wrapped in a couple of ice packs with both ankles in a bucket of ice after the game, also had a few injuries to overcome. Spoelstra said he could have been sidelined, too.

There were five technical fouls. Walker, Michael Beasley and Mario Chalmers each got one for the Heat. Boston's Brandon Bass and Crowder also got one apiece.

Stevens was bothered by his team's start with a chance to tie the Heat for seventh.

"For the first two and a half quarters, I didn't think we played and that's the frustrating part," he said.

Heat: At Atlanta on Friday.