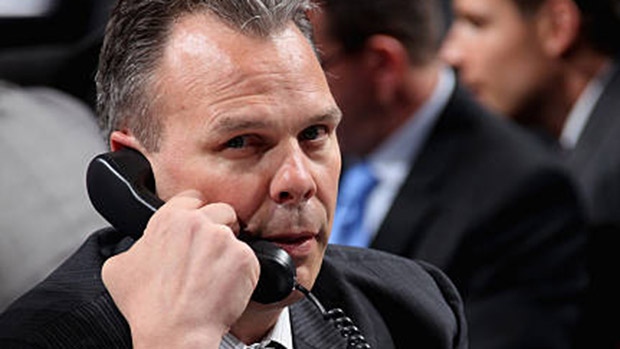 When the bell tolls three times on Monday afternoon, that’s it.

There is no leniency.

At the NHL’s headquarters in Manhattan, the clock on trade deadline day is monitored using the United States government’s official website. Any deal filed to the league by 2:59:59 p.m. ET is valid. One second later and the player(s) traded aren’t eligible for the Stanley Cup playoffs.

Amid the annual flurry of activity that is the final hour of TradeCentre, it’s amazing that no team has ever missed the deadline with a deal – at least not in the two decades that NHL senior counsel Daniel Ages has been on staff.

“We’ll get calls right up to the last second,” Ages said last week. “But not once 3 p.m. has elapsed. I don’t recall that happening before.”

Over those two decades, technology has changed immensely. Trades can officially be filed to the league by phone, e-mail and yes, still via facsimile.

The NHL actually makes sure someone is standing by the fax machine as the deadline nears, just in case a team decides to send in details of a trade under the wire. They aren’t yet set up to accept a trade over text message.

In the last 20 years, technology has also changed how the trade deadline is consumed. It has become a must-watch event for fans. The furious pace of activity has also made Deadline Day something like the Super Bowl for the NHL’s Central Registry, the group tasked with vetting, approving and finalizing every transaction.

Central Registry has processed an average of 20 trades over each of the last five Deadline Days, handling the paperwork to facilitate the changing of teams for an average of 38 players each year.

The NHL agreed to peel back the curtain on how Central Registry handles Deadline Day, a critical component to one of the days the spotlight is on the league.

A few days before the Feb. 25 deadline, the three men at the forefront of Central Registry - senior vice president and managing Sean MacLeod, director Andrew Wilson and Ages from the legal team – will travel from Toronto to set up shop in New York.

They will park themselves on the 15th floor near NHL deputy commissioner Bill Daly, who will be available for consultation and to make necessary judgments in real time on any unique situations that may arise.

That group in New York will be in constant communication with a small army of league employees at Central Registry’s home base in Montréal, which handles all of the day-to-day transactions throughout the season, including registering contracts, waiver bulletins and claims, roster recalls and loans, trades, as well as salary cap calculation and compliance.​

The key to making a trade before 3 p.m. is that every detail of the deal must be spelled out to the NHL before the deadline. Team X can’t simply send a buzzer-beater e-mail at 2:59:59 p.m. that says “Team X has a trade with Team Y.”

“All of the details of the trade need to be provided and confirmed before 3 p.m.,” Ages explained. “So if we get an e-mail, it has to set forth the players, the draft picks, the conditions, all of the important elements of the trade to confirm there’s a meeting of the minds. Whatever those details are can’t change when we then conduct a trade call.”

All of that information is sent to Montréal to be vetted. There is a laundry list of considerations to verify: sufficient salary cap room, sufficient room on the 50-man reserve list, roster limitations and requirements, possession of draft picks and whether no-trade protections are respected.

“It’s really a whole systematic process for Central Registry to confirm all of that before we can then begin a trade call with the teams,” Ages said. “Once we’ve done that, we’ll contact both teams for the trade call and confirm the terms of the trade to ensure that all conditions are clearly defined and agreed upon.”

Typically, a trade can take anywhere from 30 to 45 minutes to process – from the time it is filed to the league until the conference call is completed to finalize the deal.

But some trades are more complicated than others. Examples are language on draft pick conveyance conditions and salary retention shared by multiple teams. Signing bonuses and potential performance bonus obligations must also be announced to acquiring teams.

Sometimes the call can be delayed because a player who agreed to waive his no-trade clause must be tracked down to sign off. Because of that, some teams get the document signed before Deadline Day begins.

Last year, 12 of the 18 trades on Deadline Day were completed in the final hour. But there is a benefit in not waiting until the last second.

If there happened to be a misunderstanding between teams – or the deal is non-compliant – there would be no second chance to rework a trade after the deadline has passed. But if the deal had been completed at, say, 11 a.m., there would be time to amend it.

“We haven’t encountered any trade on Deadline Day that hasn’t been compliant with our rules,” Ages said. “But the details, all of them, need to be provided before 3 p.m., and they can’t change when we conduct the trade call after 3 p.m. Otherwise, it wouldn’t be considered a valid deal.”

The NHL actually stops conducting all trade conference calls around 1:30 p.m. because the deals are beginning to be filed fast and furiously.

“We’ll just [record] the details of the trades as they come in and then they’ll be in the queue to be processed after 3 o’clock,” Ages said.

That means on any given Deadline Day, Central Registry is still processing trades until 4:30 or 5 p.m., well after the news about those deals has broken. They’ve stayed as late as 6 p.m., putting the final trade to bed to ensure another successful deadline is in the books for the team makes it happen behind the scenes.

“It’s exciting every year,” Ages said. “It is a relief when it’s done, but really all the heavy lifting is done between the teams, because they’re the ones working out these trades themselves.”