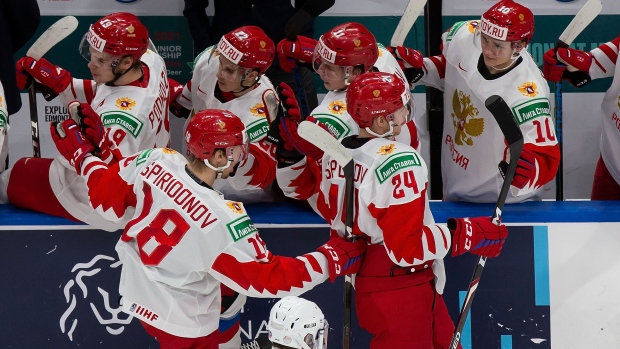 Despite some major sporting bodies making the decision to bar Russian athletes from competing, the NHL has decided it will allow Russian players to be drafted this year, while Canada should be boasting a strong roster at the 2022 World Hockey Championship. TSN Hockey Insiders Pierre LeBrun and Darren Dreger join host James Duthie to discuss those topics and more.

James Duthie: Wimbledon became the latest major sporting event to ban Russian players in the wake of the invasion of Ukraine, so we wonder is there any chance the NHL could prevent Russian players from being drafted this spring?

Pierre LeBrun: It’s a question we have asked before as recently as the GM meetings in Florida and I got the same answer again on this day when I circled back to a league official in lieu of what’s happened at Wimbledon and the answer was “no.” The NHL is not contemplating barring Russian players from getting drafted on July 7 and 8 in Montreal. I guess the other thing that we’ll have to keep an eye on is whether some of those Russian prospects are downgraded in the eyes of some NHL teams when the draft arrives. I’ve talked to a few scouts in front offices that are having that internal dialogue, but for now and I don’t think it’s going to change – Russian players absolutely allowed to be drafted.

James Duthie: Dreger, you mentioned the idea of the World Cup, (drawing) perhaps more players to the World Championship as they try to get on the radar of their respective nations. You have some names that could be out there for Canada this year?

Darren Dreger: I do and it feels like the perfect time to resurrect the “Dreger Cafe” in Finland just given some of the names that could be in play. There is still some uncertainty because the NHL regular season hasn’t wrapped up just yet, but if you look at the Montreal Canadiens, there’s a strong chance you’ll see Nick Suzuki, maybe Josh Anderson representing Team Canada. Cole Caufield representing Team USA. If you look at the Winnipeg Jets, Pierre-Luc Dubois has expressed some interest in playing for Team Canada and the Ottawa Senators have been perhaps the most vocal in acknowledging their interest – that’s Thomas Chabot, Drake Batherson, Connor Brown and maybe … maybe Matt Murray in goal. So, all being sorted out, but Team Canada, Team USA should be strong.

Duthie: Our insiders are putting on a brave face, but I know they are deeply concerned about Free Agent Frenzy Day, which is July 13, cutting into their precious cottage time, but is the crop of prospective free agents worth it?

Duthie: Free Agent Frenzy and most of the dates have been out of whack the last few years because of COVID. When will the board of governors be meeting again?

LeBrun: It’s going to be around the same time as the June meeting would be, except that’s usually after the Stanley Cup final and before the awards and now it’s going to be before the Stanley Cup final because of the late Cup final this year. So, mid-June. Board of governors, teams got notified this week and it should be an interesting one because of course while the agenda hasn’t officially been put together yet – it’s two months away – the state of the Ottawa Senators ownership will be of interest to a lot of governors I talked to today: What happens next after the passing of Eugene Melynk? The Arizona Coyotes playing in a 5,000-seat rink next year - that’s of interest to a lot of governors. Other items as well, but those certainly would be the big two.

LeBrun: They finally started reaching out to teams this week, I’m told. They started with a list of 50 names and then they went to 25. They are going to, I think, interview over the phone within the next week or so five or six candidates and then perhaps that will move to in-person interviews in the month of May. They’re going to take their time. They are OK with the current front office to run the draft. They want to get the right person.