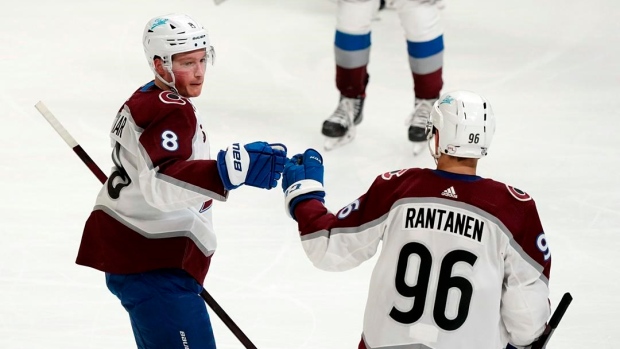 With several days separating season openers, the first NHL betting weekend gives us our first looks at the St. Louis Blues, the San Jose Sharks and the Calgary Flames. Maybe it is Halloween around the corner, but the mystery of picking each game without any 2021-22 sample from the aforementioned teams was irresistible.

The regular season is barely underway and already the Colorado Avalanche had several familiar faces missing on Wednesday night. Nathan MacKinnon, the engine of the first line, who last season gashed opponents on entries, generated shots at will, and authored primary assists at a torrid clip, was out after testing positive for COVID-19 but is asymptomatic. His coach, Jared Bednar, was sidelined for the same reason. Furthermore, underappreciated defenceman Devon Toews, who was top-10 in Goals Above Replacement (GAR ) in 2020-21, is still recovering from shoulder surgery. None of this mattered against the Chicago Blackhawks.

The score of 4-2 Avalanche belies their dominance. The Blackhawks finished with 0.94 expected goals at 5-on-5 (!) and Colorado owned the high-danger chances advantage 8-0 through two periods. The Blackhawks’ signature chaos felled them early (bad help on a pinch, a sloppy icing, and insufficient transition defence). Watching the way Gabriel Landeskog engineered the Bowen Byram goal, you could almost have mistaken him for MacKinnon. It was a pretty buttonhook by Landeskog that bought him time to find Byram as the weak-side trailer. And then Landeskog boarded Kirby Dach and was suspended for two games.

The Avalanche were 22-4-2 in their own barn in 2020-21, despite suffering nearly 350 man-games lost. Colorado has unmistakable plug-and-play interchangeability—but no Landeskog and Toews, and maybe no MacKinnon? What level of confidence should bettors have to grab St. Louis?

Despite a roster dotted with notable names, last season was disappointing for the Blues. They were the worst team in the league in high-danger chances per hour and second worst in expected goals per 60 minutes at 5-on-5. To underline how ghastly that is, only the Detroit Red Wings were worse.

So, who drove some of that decline? Brayden Schenn saw his expected goals above replacement (xGAR) dwindle to 1.4 in 2020-21, a far cry from where it was the previous two campaigns. In 2018-19, Vladimir Tarasenko and Colton Parayko both had xGARs of 15.1. Two seasons later, Tarasenko is at -0.1 xGAR and Parayko is 0. As Dom Luszczyszyn highlighted in his preview of the Blues for The Athletic, Parayko has been outchanced in his previous two campaigns, and opponents lit him up on the scoreboard last season.

The potential panacea for the Blues is goaltending. Among goaltenders with 25 or more starts, Jordan Binnington was top 10 in goals above replacement (GAR). Darcy Kuemper will attempt to replace Grubauer for the Avalanche. How much of a difference goaltending makes in this game is a huge question.

The Avs’ speed and passing proved overwhelming for the Blues in the last playoffs, and I am doubtful St. Louis is better equipped to deal with them this season. If Landeskog were playing, I’d be eager to whittle down the price with a 60-minute line, but with him out, I’ll take the Avs’ money line.

There is a distinct possibility that the San Jose Sharks quickly derail this season. Like a volatile family member barking for their drink to be topped off, the warning signs of a meltdown are visible. The Sharks finished with under 50 points in a top-heavy West Division last season, and now they are without Evander Kane for the foreseeable future.

But his impact on captain Logan Couture is the most concerning variable in Kane’s absence. Kane spent 502 minutes playing left wing with Couture as his centre. When Kane played away from Couture, his expected goals didn’t noticeably flag and, in the case of high-danger chances, it improved. But when Couture played away from Kane, his expected goals plummeted to 45.98 and his high-danger chances dropped to 47.44. Now, the 32-year-old Couture is about to start the season with rookie Jonathan Dahlen replacing Kane. Dahlen has played zero games in the NHL. Yikes!

For at least this contest, I am buying the narrative that the Winnipeg Jets’ defence is slightly improved from last season. Considering the Jets were one of the worst five teams in allowing high-danger chances per hour at 5-on-5 last season, this has the whiff of “I refuse to get another D on my next test.” The bar is low. Nevertheless, Derek Forbort and Tucker Poolman are gone, and the addition of Nate Schmidt and Brenden Dillon heralds a defence that will be less passive.

Now that the Jets' defence has stronger personnel, there has been a lot of buzz about them playing more aggressively both at their opponents' blue line and while defending entries. It was apparent against the Anaheim Ducks Wednesday night. The Jets defencemen evidently had more autonomy to play confrontationally and chase toward the perimeter, relying on their forwards to fill the middle.

After the first TV timeout in the first period, consecutive efforts by Logan Stanley to step up and hold the blue line disrupted the Ducks’ breakout, leading to a Nikolaj Ehlers opportunity from the middle slot. On the Kyle Connor snipe, Josh Morrissey and Schmidt took an aggressive posture on Anaheim’s transition. It was Blake Wheeler filling the middle that would initiate the counterattack that led to the goal. For this game, I endorse the Jets’ hope that these changes have the desired effect.

While the Sharks improved their goaltending by discarding the putrid Martin Jones, Winnipeg has the sensational Connor Hellebuyck, who last season finished second in the NHL in goals saved above expected (GSAx), trailing only Marc-Andre Fleury. Hellebuyck was abjectly bad against Anaheim, weak in his rebound control and posting a -0.59 GSAx on the night. I am doubtful Hellebuyck posts another woeful performance.

Ultimately, the Jets’ defence struggled to defend around their net against Anaheim, and the Winnipeg breakout was inconsistent. But San Jose was fourth worst in high-danger chances against and expected goals against per 60 minutes last season at 5-on-5. The Sharks’ porous defence seems like the salve Winnipeg needs. In centre Mark Scheifele’s return from suspension, give me the Jets moneyline.

Stopping Connor McDavid was a nearly impossible task last season. McDavid posted 105 points in 56 games, a dizzying number that harkens back to the NHL of the 1980s. But when the playoffs rolled around, his Edmonton Oilers were swept in the first round by the Winnipeg Jets. McDavid scored a ho-hum one goal and three assists. It was wild to witness.

Can Calgary replicate the Jets’ magic? There is reason for incredulity. Unlike the Oilers, who are assassins on offence when McDavid and Draisaitl demolish their enemy, notably in last season’s league-leading power play, Calgary lacks a trump card. The Flames’ range of play doesn’t stray into excellent.

The Oilers added the much doted on Zach Hyman in the off-season, and many anticipated he would play wing alongside McDavid, acting as an invaluable safety valve for the game’s best player. But on Wednesday night, McDavid started off with Leon Draisaitl.

In recent years, McDavid’s line’s defence has been awful, neutralizing his comet-sized offensive impact. On Wednesday night against the Vancouver Canucks, the line got outshot at 5-on-5. And yet, last season when McDavid played with Draisaitl, the Oilers outscored opponents 33-17 and had a scorching 57.32 expected goals percentage at 5-on-5. Thus, Hyman playing with Ryan Nugent-Hopkins makes sense.

Meanwhile, the off-season for Calgary was charged with a sense of loss as the beloved Mark Giordano, the longtime linchpin of the Flames’ defensive group, joined Seattle in the expansion draft. Giordano finished second only to Chris Tanev in expected defensive goals above replacement, and his departure will not be easy to swallow.

Instead of replacing Giordano, Calgary is hoping internal growth from their incumbent defencemen will alleviate the loss of the former Norris Trophy winner. Will it work? I’m bearish. One reason is that Tanev, who had a terrific season in 2020-21, seems doubtful to repeat that performance. Tanev will be age 32 in December, and his last two seasons in Vancouver were mediocre. Nevertheless, he and defensive partner Noah Hanifin will be relied on to assume a bigger burden. Compounding concerns for the Flames is Jacob Markstrom’s play from last season, where he submitted below-average numbers. If Calgary is going to win this game, Markstrom needs to be stellar.

The Oilers’ weakness is their defence. Maybe Calgary can outscore them? Darnell Nurse had a monster offensive season in 2020-21, but his defensive numbers were poor enough to nearly offset his scoring output. Edmonton’s newly formed Duncan Keith-Cody Ceci defensive pairing is highly flammable, and the threat of the twosome incinerating the Oilers’ chances in a single game will be persistent. Still, against a good Vancouver forward group, the Oilers’ defence didn’t break. The Canucks tallied one power-play goal and the other came when Oilers’ goaltender Mike Smith whiffed on a Quinn Hughes lob.

I also have doubts about whether Calgary has the offensive firepower to dismantle Edmonton. With coach Darryl Sutter at the helm, the emphasis is on a more forecheck-heavy, chip-and-chase game. That isn’t conducive to the skillset of Johnny Gaudreau, who is at his most dangerous attacking off the rush. Add in a possibly declining Sean Monahan coming off hip surgery, and Calgary’s offence looks increasingly benign.

The Oilers’ top-six forwards are devastating, maybe even more so than last season. Their power play has the influence to win a game single-handedly. Nurse and Tyson Barrie are vulnerable defensively, but their mobility was praiseworthy on the Jesse Puljujarvi goal against Vancouver. At home against an opponent who might only be able to win a low-scoring contest despite the Oilers’ glaring defensive issues, I’ll take the best player in the world.