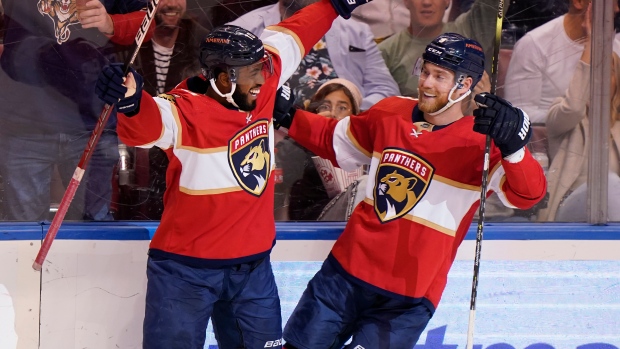 We have reached the point in the season when every game is a potential land mine. Franchises that have had their playoff dreams dashed get to play the role of the protagonist with nothing to lose. As savvy bettors, we want to avoid the high-priced traps and find matchups we can believe in.

Surrendering the neutral zone to the Florida Panthers is an almost certain death wish. The Vegas Golden Knights thought they could skate with the Panthers on Thursday night, but before the first TV timeout they had to withstand a barrage of rush chances. However, in the last three games of the Panthers’ road trip out West, the Panthers met resistance in their attempts to gain speed through the middle of the ice.

When the Winnipeg Jets played the Panthers on Tuesday, TSN colour analyst Kevin Sawyer did a nice job highlighting the Jets’ use of “The Slash,” a tactic where the weak-side defenceman cuts across to the near-side lane to confront the puck-carrier and hopefully reduce his speed through the neutral zone. Overall, the last three teams on the road trip attempted to contain the transition and they did an admirable job. They limited the Panthers’ stretch passes and gapped up in the neutral zone.

If San Jose wants to stay competitive, it will need to excel in this mitigation tactic. The Sharks want to win with defence and goaltending, and their expected goals against and high-danger chances against are fine, but not excellent, and goaltender James Reimer has been only adequate between the pipes. Slowing down the Panthers’ rush is a daunting assignment, but it is possible.

The Sharks’ offence is buoyed by Timo Meier and Tomas Hertl, who have waxed opponents in more than 200 minutes together, posting a plus-17 goals differential. After getting pulverized by Tampa Bay last Saturday, the duo was split up when the Sharks won against Washington on Wednesday night. Spreading out the skill is a necessary move against the Panthers, who have arguably the deepest forward group in the NHL.

In recent games, the Panthers’ fallibility has been on display. For example, forwards have been slow to track their man in transition defence. But the Sharks don’t have the type of offence to leverage this vulnerability. Coach Bob Boughner wants them forechecking and cycling as first-order priorities—and funneling the puck toward the net when possible. The Sharks’ transition offence may be too feeble to capitalize.

In the Panthers’ loss to Seattle last Sunday, the Kraken’s aggressive, layered forecheck caused fits for Florida on breakouts. The Kraken aggressively challenged the Panthers at both blue lines, chopping up the momentum the Panthers strive to collect as they motor up the ice. However, the Sharks are not an elite defensive team, and they will have difficulty replicating Seattle’s tactic.

The Panthers’ speed jumps off the television screen, and if they skate around the Sharks’ forecheckers, the Sharks’ defencemen are in trouble. The end may be near in terms of the Panthers’ affordability at home, where they are 22-3. Before then, I’ll grab them in regulation.

Should the Lightning win the Eastern Conference bracket, there is a decent chance they will find the Golden Knights waiting for them in the Cup final. I think Saturday’s game will be decided on counterattacks, making mindful puck management paramount.

Tampa Bay possesses a diverse repertoire of counterattack looks, and because Vegas likes to challenge its opponents with its aggressive pinches, this presents an important stylistic clash. The Lightning can create transition opportunities on the counterattack by holding the blue line, and they can also beat you with the stretch pass.

Even the defensive coverage Tampa Bay runs is a potential counterattack platform. The Lightning play man-on-man defence, and that demands quick switches. When their coverage flows upstream in the defensive zone, they can force turnovers when they attack the point with speed. Against the Los Angeles Kings, Victor Hedman weaponized Tampa’s own-zone defence to produce a breakaway goal.

Imitation is the highest form of flattery and the Lightning would be wise to crib from a peer for another mode of counterattack. On Tuesday night, the Hurricanes created rush chances by exploiting the Golden Knights’ defenceman’s pinch on the weak side.

When the Hurricanes swung the puck around the boards to their outlet, their forward would chip it past the Vegas defenceman stepping up for the pinch. Simultaneously, a Hurricanes forward would sprint through the neutral zone to collect the puck and race down the ice to challenge goaltender Robin Lehner.

In writing, this all sounds great, but the Lightning’s ambitions disintegrate if they cannot manage the puck effectively. In the Lightning’s most recent loss, against Anaheim a week ago, the Ducks were able to get the Lightning defencemen to retreat instead of holding the line.

Part of the reason Anaheim was able to gain this type of traction was that the Lightning were turning over the puck on entries. If Vegas gets Tampa Bay’s defencemen to sag on their gaps – an increasingly likely possibility with the return of Max Pacioretty and Reilly Smith – the Lightning will need goaltender Andrei Vasilevskiy to bail them out.

All this doting on Tampa Bay robs the Golden Knights of deserved credit for their counterattack. In my opinion, they are the best in the league at using a bump pass in the middle of the ice to challenge their opponent’s speed on the perimeter. From a defensive zone faceoff, Vegas will use the length and width of the ice to challenge its adversary’s back-side coverage.

One thing the Golden Knights should steal from the Devils’ playbook against the Lightning on Thursday is how New Jersey exposed the vulnerability of the Lightning’s man-on-man defensive coverage, with the Jesper Bratt and Jack Hughes’ give-and-go being a prime example. Action up high can force unappealing matchups down low where Lightning forwards – on Thursday it was Brayden Point – are thrust into boxing out around the net.

In terms of keeping things tidy in their own end, the Golden Knights also need to be cognizant of Hedman. When the Golden Knights overload on the puck, big No. 77 will surely be lurking as an option on the weak side. The threat when Hedman is on the ice abounds. Against the Devils, he carried the puck down low, opening up room for Steven Stamkos and Brayden Point to set up in the middle-to-high slot as shooters.

The Lightning will be without Nikita Kucherov, which is a huge, but familiar, loss. While the Golden Knights had multiple critical players return to the lineup on Thursday night, they are finishing a brutal week, with Saturday being their fourth game in six days.

The Lightning are at home and should be well rested, and I expect goaltender Vasilevskiy to be in goal. I’ll take the Tampa Bay moneyline.

Could we be looking at a revenge game for Carolina? Last Saturday, the Hurricanes allowed seven goals to the Devils, the most tallies they have surrendered all season.

Admittedly, it was a trying performance for rookie goaltender Jack LaFontaine. But blaming LaFontaine gives Carolina’s skaters an unfair pass. The Hurricanes were defeated because they were outplayed.

The Devils more than doubled the Hurricanes in high-danger chances and notched six 5-on-5 goals. The 36 shots Carolina allowed was the highest shot total they have conceded at 5-on-5 this season. I am expecting a loud, brash response from the Hurricanes as they sharpen their knives for this rematch.

Because these two played recently, we can look at what worked last weekend and speculate about its relevance for Saturday. For instance, the Hurricanes struggled with their gaps and transition defence against the Devils, and I suspect they will want to slow this game down. Translation: Carolina will apply its implacable forecheck and cycle to grind out a win. In Thursday night’s contest against Ottawa, Carolina adopted this simplified game plan, giving oxygen to this thesis.

The Hurricanes harness the cross-corner dump-in to attack in layers. Last Saturday, Carolina’s skaters attacking in waves proved a nuisance for New Jersey to defend. While the Devils could race down the ice and take away the first and second option, they sometimes missed the weak-side defenceman sitting in the weeds.

But the offensive-zone machinations don’t end there. The Hurricanes also made a big push to force the Devils into switches and set up the weak-side defenceman to dive in for a scoring chance. The Devils like to use the flip pass to stretch the ice and exit the zone, and if New Jersey can shorten the Hurricanes’ offensive zone time, Carolina won’t have as much time to manipulate the Devils’ defence.

If Carolina goaltender Frederik Andersen is in net, which seems likely, that poses a significant goaltending advantage. Against New Jersey last weekend, the Hurricanes struggled to box out the Devils in the paint, resulting in multiple goals. Andersen has been awesome this season, but if New Jersey is getting inside position tomorrow night, Carolina is in trouble.

Still, Andersen is far better than the Devils’ goaltending options of Akira Schmid or Jon Gillies. To be clear, neither goaltender has been good, and goaltending is a crucial reason why the Devils only have three wins since 2022 began.

I love Carolina fired up, looking to exact revenge against a Devils team that has been downright bad on the road. And I’m fine taking them in regulation to get the price down.