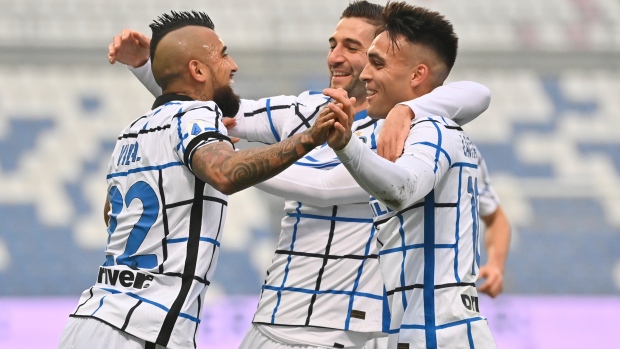 Alexis Sánchez scored early and a Vlad Chiriche? own goal shortly after doubled Inter’s lead. Roberto Gagliardini scored in the second half as Inter recorded only its second win in seven matches.

Inter played with an intensity coach Antonio Conte demanded, and Sassuolo barely had a sight of goal apart from a curled effort from Filip Ðuricic that hit the outside of the right post.

“Today was perhaps our best display in terms of our ferocity, but I don’t think it was our best performance of the campaign,” Conte said. "We’ve done better this season only to not pick up a positive result.

"I’d like to congratulate my players on how they did. It’s not easy, especially at Inter, because many people can’t wait to criticize us ... but we are a unified front and such situations should provide us with more strength.”

Inter moved to second, level on points with Sassuolo but above it on goal difference. They are both two points below AC Milan, which hosts Fiorentina on Sunday.

Juventus is a point below Inter and Sassuolo, in fifth, after it was held at Benevento to 1-1.

Hellas Verona won at Atalanta 2-0 to leapfrog its opponent into sixth.

Sassuolo knew it could move to the top with a win at Inter, which was coming off a midweek home defeat to Real Madrid in the Champions League.

Just like in all the Serie A matches this weekend, there was a tribute to Diego Maradona, who died on Wednesday in his native Argentina. That included a minute's silence for the former Napoli player, while his image was also projected on the stadium screens again in the 10th minute, in honour of his jersey number.

Inter got off to the perfect start when Chiriche?’ clearance was intercepted by Lautaro Martínez, who then rounded goalkeeper Andrea Consigli. Chiriche? got back but Martínez managed to roll it across for the easiest of goals for Sánchez.

Ten minutes later, a corner from the left fell to Arturo Vidal and his cross bounced off Chiriche? and squeezed into the bottom right corner.

Inter sealed the result on the hour with a splendid finish into the bottom left corner from Gagliardini after a cross from Matteo Darmian.

Juventus rested Cristiano Ronaldo for the trip to Benevento. The five-time Ballon d’Or winner had nine goals in his past seven matches but was not even on the bench and the Bianconeri clearly missed their star striker.

Juventus sealed its progression to the knockout stage of the Champions League with two matches to spare on Tuesday and appeared lethargic on Saturday.

The Bianconeri broke the deadlock in the 21st after Federico Chiesa sent a wonderful pass from inside his own half over the top to Álvaro Morata, who controlled it, skipped past a player, and fired into the bottom right corner.

However, Benevento levelled in first-half stoppage time when Juventus failed to deal with a corner and it eventually fell nicely for Gaetano Letizia to fire into the bottom left corner.

Morata was shown a straight red card after the final whistle for comments to the referee.

Atalanta was looking to build on its stunning Champions League victory at Liverpool and it dominated the first half but wasted opportunities.

However, Verona was transformed in the second half, showing early signs when a swerving Miguel Veloso strike smacked the crossbar.

But then Verona goalkeeper Marco Silvestri pulled off several saves and an effort was also cleared off the line.

Verona took the lead in the 62nd when Veloso converted a penalty after Rafael Tolói fouled Mattia Zaccagni.

Zaccagni secured the result seven minutes from time when he fired Veloso’s ball over the top into the bottom right corner.