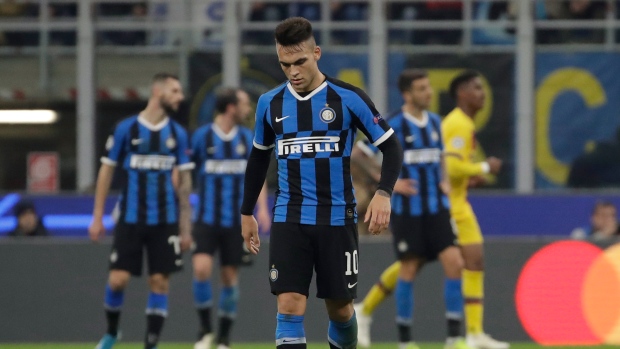 MILAN — Inter Milan was knocked out of the Champions League on Tuesday with a 2-1 home loss to an under-strength Barcelona side.

Inter, which had three goals ruled out for offside, needed to at least match Borussia Dortmund’s result against Slavia Prague to progress to the round of 16 but the German side won 2-1.

Barcelona had already won Group F and finished four points above Dortmund and seven above Inter, which will go into the Europa League.

The Spanish side rested a number of key players for the match, including six-time Ballon d’Or winner Lionel Messi.

Inter started brightly as Danilo D’Ambrosio blazed over the bar from a good position in the fifth minute and Lukaku had the ball in the back of the net two minutes later, but he was clearly offside.

Another well-worked Inter move saw the home side sweep the ball from left to right and Lukaku picked out an unmarked Cristiano Biraghi, but he had his shot parried by Barcelona goalkeeper Neto.

Barcelona took the lead against the run of play in the 23rd minute when Inter defender Diego Godin could only knock on Antoine Griezmann’s through ball to Pérez.

Barcelona could have doubled its lead 10 minutes later but Clément Lenglet fired wide from close range.

Inter laid siege to the Barcelona goal and levelled moments from halftime when Lautaro Martínez collected the ball with his back to goal and held off a defender before passing to Lukaku, who drilled it into the bottom right corner with the aid of a slight deflection.

Inter continued to pepper the Barcelona goal after the break as it searched for the crucial second goal.

Lukaku went closest in the 61st as he shrugged off a defender but fired straight at Neto.

Martínez, who also curled narrowly wide of the left post from distance, had two goals ruled out for offside as Inter threw everything at Barcelona.

But the Spanish side ended any hope Inter had when Fati fired in off the inside of the far post, two minutes after coming off the bench.