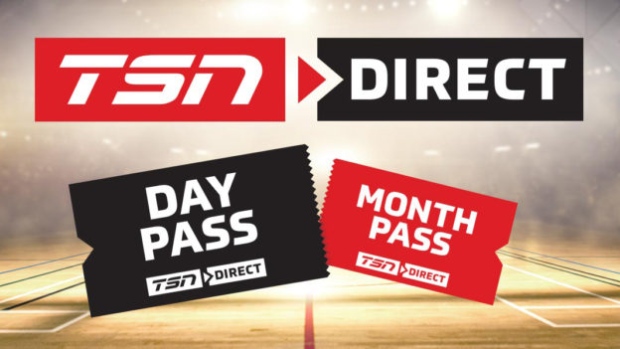 Canada’s most-watched sports networks announced today even more options for fans across the country to access their industry-leading rosters of marquee sports programming with the introduction of the Day Pass subscription to their TSN Direct and RDS Direct streaming services. The all-new, single-day subscription option is the first of its kind in Canada.

With TSN the only place for Canadians to watch every game of NCAA® MARCH MADNESS®, Day Pass arrives just in time for TSN’s comprehensive coverage of the tournament (exact launch date to be confirmed).

Offering incredible value with no contract, Day Pass gives Canadian sports fans access to subscribe to TSN and RDS channels for 24 hours for $4.99. Viewers can watch on a multitude of platforms including computers, tablets, mobile devices, and Apple TV, with TSN Direct also available on Samsung SmartTV and Xbox One, and more platforms to be announced soon.

“We’re very excited to expand our viewing options for Canadian sports fans by providing single-day access to the country’s most-watched sports channels,” said Stewart Johnston, President, Media Sales, Marketing, and TSN. “Our viewers have asked for more options when it comes to accessing high-quality streaming coverage of the biggest moments in sports, and we’re proud to deliver that with Canada’s first single-day subscription.”

“The single-day pass option for RDS Direct puts the largest portfolio of exclusive French-language sports properties in the palm of fans’ hands,” said Karine Moses, President, Bell Media Québec. “We’re pleased to give viewers greater access to our French-language sports coverage in Québec, reaching a larger audience and providing more choice than ever before.”

Current TSN and RDS television subscribers can continue to access TSN’s five feeds and RDS content through the apps or TSN.ca and RDS.ca by providing their service provider account details when logging in.

Users can download the TSN and RDS apps by searching “TSN” or “RDS” in the iTunes App Store (iOS) or Google Play Store (Android). In addition to continuing to offer live streaming and on-demand content, both apps provide an extensive scoreboard, news updates, in-depth articles, video highlights, and complete broadcast schedules, as well as TSN Radio live streams on the TSN app.