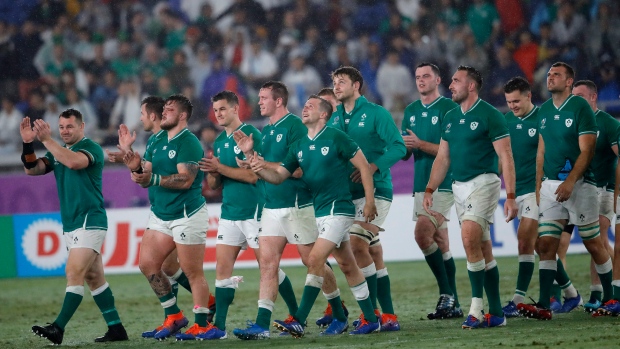 YOKOHAMA, Japan — The Scots talked themselves up. How they smelled Irish blood without injured star backs Rob Kearney, Keith Earls, and Robbie Henshaw. How they could overcome anything coming their way in a green jersey.

They picked their most battle-hardened side ever for a Rugby World Cup match. But it didn’t matter. Again.

Scotland was bullied by Ireland to the tune of 27-3 on Sunday, and coach Gregor Townsend was stunned.

“We didn’t start with the energy, accuracy and aggression to beat a team like Ireland,” Townsend said.

Ranked No. 1 until Monday, Ireland played like a serious World Cup title contender by dominating its regular doormat, Scotland. In the last 20 Six Nations head-to-heads, Ireland has beaten Scotland 16 times.

The Irish pack ran the show in the first half with tries in the first 25 minutes to tight forwards James Ryan, Tadhg Furlong and 37-year-old captain and hooker Rory Best. Rain arrived as forecast just before the interval, and Ireland added the only points after, including a bonus fourth try to wing Andrew Conway.

From this first matchup with Scotland on neutral turf in 139 years, Ireland should win Pool A. Its remaining games are against host Japan next weekend, then Russia and Samoa.

“When you start a tournament against a team like Scotland,” Best said, “there are a lot of nerves. You know you have to play well and start well. We’re delighted.”

As usual, Scotland was its own worst enemy, committing 12 handling errors and 16 turnovers, half of them on attack. Ireland was ready to counter.

Scotland center Duncan Taylor’s miss-pass into touch gave Ireland the lineout from which Jonathan Sexton led a surge and Ryan scored off a ruck with a helpful shove from Cian Healy. After only six minutes.

A penalty against Scotland flanker Hamish Watson was turned by Ireland into a five-meter lineout. The Irish drove it and Best was on his back when he became the fourth oldest try-scorer in tournament history. That was after 13 minutes.

Then Scotland dropped a pass on attack, Ireland center Chris Farrell hacked on, and Scotland fullback Stuart Hogg was caught in possession behind his posts. Ireland charged from the five-meter scrum and Furlong ploughed over.

Scotland’s only points came from a rare attack it didn’t mess up. Tommy Seymour was unleashed on the right touch line, earned a penalty, and Greig Laidlaw slotted it.

There was no way back for Scotland, especially not in the rain.

The bonus-point try was inevitable. Conway, playing for Earls, outjumped Scotland No. 8 Ryan Wilson for an up and under, and it was snagged by fullback Jordan Larmour, playing for Kearney. Larmour set the ruck, and Conway beat two defenders to score in the right corner.

Scotland toiled without reward, foiled by a slippery ball and stern Irish defense. The Irish missed only two tackles in the first half and eight in the match.

Scotland was left to also worry about Watson, whose knee was injured when he was cleared out in a ruck. He was carried off and taken away for scans. Jamie Ritchie was recovered from a broken cheekbone and should be available to play Samoa on Sept. 30.

“The pool’s not won or lost tonight,” Scotland captain Stuart McInally said. “We’re massively disappointed not to start better, but we have to get over that and we have to learn our lessons. We’ve got a massive three games coming up.”