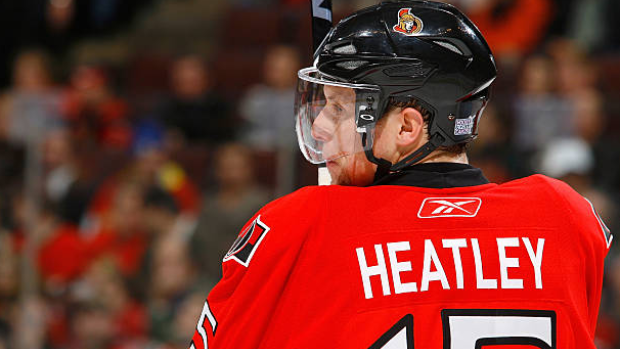 Exactly 10 years ago, the Ottawa Senators opened training camp under a swirl of controversy.

It was Sept. 12, 2009, and, in a plot twist that nobody foresaw, Dany Heatley showed up to the club’s first day of medical testing.

The superstar winger had asked for a trade three months earlier, but general manager Bryan Murray was unable to execute a deal to his satisfaction – awkwardly forcing Heatley back into the Senators fold.

It was a tense situation and one that appeared to be untenable with his teammates. Days earlier, Daniel Alfredsson admitted that having Heatley back as an unhappy camper would create a massive media headache for the players inside the Senators dressing room.

“If he comes back there’s going to be a lot of focus and attention,” Alfredsson said. “If somebody hits him in practice or something occurs, everything is going to get blown out proportion.”

With the spectre of an awkward reunion on the horizon, Heatley snuck back to Scotiabank Place, avoiding the cameras and throng of media.

But less than six hours after he walked into the arena on that Saturday morning in September, Heatley was traded to the San Jose Sharks. Murray told reporters he knew he had to facilitate a trade to avoid a tense situation after seeing Heatley in person for the first time following a tumultuous summer.

“When I looked him in the eye, I knew that the minute he walked out the door that I had to trade him,” Murray said. “I didn’t think there was any chance. I just felt that we had to move him.”

Heatley, dressed in a crisp white T-shirt and blue jeans, addressed the media for less than three-and-a-half minutes after the trade was completed. His answers during that brief media session left a lot of room for ambiguity.

“I don’t think I did anything wrong asking for a trade,” Heatley said. “I had my reasons for it. If people want to think differently of me, that’s fine. But I believe I did nothing wrong and I’m happy to move on.”

While Heatley was vague about his reasons for wanting to leave town, he was crystal clear about one thing: The city of Ottawa and the fans had nothing to do with his departure. On multiple occasions during his exit interview with the local media, Heatley tried his best to send a message of heartfelt gratitude towards the people of Ottawa.

“I’ll miss the city, I’ll miss the fans,” he midway through his session. “The fans have been great to me since I’ve been here and I have nothing but respect for them.”

The fans, however, did not have the same sense of mutual respect for Heatley after the deal was finalized.

He quickly leaped past Alexei Yashin to become the most reviled ex-player in franchise history. When Heatley made his first return to Ottawa as a member of the San Jose Sharks in December of 2010, fans placed Heatley action figures inside the urinals at Scotiabank Place.

Many fans who attended that game covered up certain letters on their No. 15 Heatley jerseys so the name plate would simply spell out “H-A-T-E.”

During the third period of that contest, a group of 10 fans came down to ice level and simultaneously threw their Heatley Senators jerseys onto the ice in a coordinated protest.

One fan inside the arena bowl held up a sign that read, “Even Yashin Thinks You’re A Jerk.” 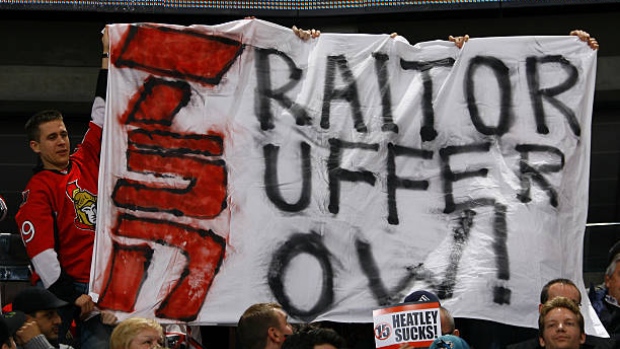 As the years passed, however, the vitriol towards Heatley seemed to dissipate significantly. The reduced tension towards the former sniper may have been directly linked to Heatley’s decreased scoring totals.

After leaving Ottawa, Heatley watched his goal totals dip in the next four full seasons that he played– plummeting from 39 to 26 to 24 and then to a paltry 12 as a member of the Minnesota Wild in 2013-14.

Of note, Heatley would go on to score 112 goals for the rest of his NHL career after he left Ottawa. The main player coming back from San Jose in the deal – Milan Michalek – actually outscored Heatley, collecting 115 goals in his time with the Senators from 2009-2016.

By the time he left the NHL – after a brief six-game stint with the Anaheim Ducks in 2014-15 – he was Dany Heatley in name only. He bounced around with stops in Norfolk and San Antonio in the AHL before wrapping up his career with the Nuremberg Tigers in the German Elite League. He slowly vanished from the radar of Senators fans, going from their No. 1 target of vitriol to a distant memory.

As we hit the 10-year anniversary of his controversial trade to San Jose, it’s time to ask a legitimate question to Senators fans: Are you ready to forgive Dany Heatley?

This wouldn’t be a topic worth broaching if it wasn’t for the way Senators fans embraced Yashin during the outdoor game in December of 2017.

Yashin – the only other superstar to be universally reviled by the fan base after a nasty divorce – was welcomed back that weekend with open arms. He was given a loud ovation during his introduction during the alumni game and stopped to take pictures and sign autographs with fans along Wellington Street. Despite the minus-30 temperatures on a frigid December night, there was clearly a thawing of relations between Yashin and the fan base.

Prior to that outdoor game, I asked Eugene Melnyk if he would be amenable to inviting Heatley back for the alumni game. Melnyk, of course, had a public feud with the star winger stemming from Heatley’s $4 million dollar signing bonus that was paid to him in that tumultuous summer of 2009. Melnyk contended that he shouldn’t have paid a hefty roster bonus to a player who was seeking a trade and slapped a lawsuit on Heatley to try and recoup his money. The two eventually settled out of court in the fall of 2013, although the terms of the arrangement were never publicized.

The contempt for Heatley was still palpable in Melnyk’s voice when he responded to my question about inviting his former sniper to the alumni festivities.

“He’s in Germany, enjoying Division Two hockey over there. But I don’t think Dany is going to come back here,” Melnyk said flatly. “He wouldn’t be a good example.”

Other superstars have orchestrated their way out of Ottawa as the years have passed, although each had their own unique circumstance. Alfredsson left as an unrestricted free agent, but made it painfully clear that he felt disrespected in contract negotiations.

Jason Spezza asked for a trade out of town, but that was viewed more as a polite request rather than an outright demand.

With each passing departure of a superstar player, however, it’s interesting to watch how the pendulum has slowly swung towards the player’s perspective in the court of public opinion.

While Heatley was vilified for demanding a trade out of Ottawa, many fans sided with Karlsson for his decision to leave town.

With the benefit of hindsight, is it possible Heatley was truly no different than any of the other stars who left after him? Maybe he just wanted to leave a chaotic and dysfunctional situation. Heatley hinted as much when I asked him about his trade from Ottawa about 15 months after it happened – in November of 2010.

The major difference being that when Heatley left, the temperature around the Senators was merely on low, while things had completely boiled over by the time Karlsson was traded.

There will still be many Senators fans who keep Heatley at arm’s length until he provides a more detailed account of why he wanted to be traded. For the past decade, rumours have swirled around town about the real reason for his departure – ranging from plausible to laughable to downright ludicrous.

But everybody has a theory, and for some, they still seek closure on that front.

Heatley politely declined a request from TSN.ca to comment for this story when he was contacted last week. There might be a day when he opens up and shares his true feelings about how things transpired in the summer of 2009.

But perhaps he needs a gentle nudge in that direction first.

Maybe Heatley needs to know that when he does make a public appearance again in Ottawa he won’t be treated with the same toxicity he’s been met with in the past. Perhaps he could get the same warm reception that Yashin received on that chilly December night two years ago.

In many ways, the Senators are still in their infancy – devoid of a rich and colorful history that spans generations like their two closest rivals, the Montreal Canadiens and Toronto Maple Leafs. As such, the fans need to celebrate the brief history and embrace the characters who have helped define the franchise. Heatley’s first two years in Ottawa might very well be the two greatest seasons in team history.

Heatley is the only 50-goal scorer in franchise history and was the backbone of the team that made its only trip to the Stanley Cup Final. He was the finishing piece on a line with Alfredsson and Spezza, a trio so lethal they were nicknamed the ‘Pizza Line’ for their penchant for scoring goals on home ice at a time when the franchise was giving away free pizza slices on the nights the team scored five goals.

Yes, he asked for a trade out of town, but that certainly doesn’t make him unique in the annals of Senators history.

And if time truly does heal all wounds, 10 years seems like the right amount of passage for fans to re-embrace Heatley.