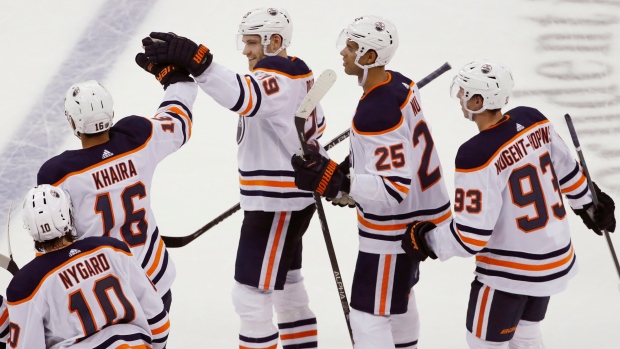 Three weeks into the 82-game slog, it’s the question everyone wants answered: Is my team’s start real or fake? Is it the genuine article or just a mirage?

Everyone loves to separate the contenders from the pretenders, even when the St. Louis Blues proved last year that January might still be too early to do so.

Nonetheless, let’s dissect five starts that have generated buzz for the right (or wrong) reasons early this season:

Scoop: Edmonton’s start has been the talk of the early season. Connor McDavid (17 points) and Leon Draisaitl (15 points) are on another level. The ‘Real Deal’ James Neal is well on the way to redeeming himself with an incredible eight goals in seven games. But those three account for 19 of the Oilers’ 28 goals. Edmonton’s nine other forwards have scored just five. That lack of depth scoring, coupled with a power play due to come back down to Earth, should be cause for concern. The pleasant surprise – and cause for optimism – has been the play of goaltenders Mikko Koskinen and Mike Smith, who have a combined .922 save percentage. There are so many questions yet to be answered, which is why it’s still difficult to stand up and declare Edmonton will be a playoff team.

Scoop: No Evgeni Malkin, no problem? Time and time again, when it seems like the Penguins are ready to be counted out as their roster is ravaged by injury, they somehow find a way. A big part of that is how Sidney Crosby and Kris Letang have put the rest of the team on their shoulders. Crosby (12 points) just quietly keeps up with McDavid, the No. 1 ranked player in the world by TSN, putting together masterful performances like he did on Wednesday night against Nathan MacKinnon, scoring his 450th career goal. With Malkin likely looking at a six-to-10 week time frame to return, and Nick Bjugstad, Alex Galchenyuk, Jared McCann and Bryan Rust still on the shelf, the Penguins simply need to stay afloat until then – and that seems like a real possibility.

Scoop: Talented Central Division team wins the summer and stumbles out of the gate. Stop us if you’ve heard this before, with the St. Louis Blues one year ago. The Stars’ stars, Tyler Seguin (two goals), Jamie Benn (one goal) and Joe Pavelski (one goal), have underwhelmed. Summer signee Corey Perry has just returned from a fractured toe. Goalie Ben Bishop hasn’t had a run this poor to start a season since some of his first NHL games back in 2010-11. The staple of last season’s Stars team was stingy defence – something that should stabilize them while the offense finds its legs.

Scoop: Coach Ralph Krueger is working his magic in Buffalo, where the Sabres are off to their best start in 12 seasons. Rookie winger Victor Olofsson (six goals) has been a revelation and Jack Eichel (four goals) appears poised to finally break through the 30-goal glass ceiling. Young defenceman Rasmus Dahlin has taken a massive step forward with his dynamic play, while also learning a few difficult lessons under Krueger. Here’s the most encouraging news: Brandon Montour will be back soon, followed by Conor Sheary and Zach Bogosian. Factor in some growth from Casey Mittelstadt and Sam Reinhart and there’s no reason to believe Buffalo can’t be in the wild-card conversation.

Key Stat: Both special teams (power play at 17.9 per cent, penalty kill at 77.8 per cent) are below NHL average

Scoop: That the surging Hurricanes have picked up right where they left off last season in the Eastern Conference final shouldn’t be a surprise. So far, they’ve taken down three playoff teams from a year ago in the Capitals, Lightning and Islanders. They haven’t been lucky (100.5 PDO), nearly all of their stats are sustainable, and there is still plenty of room for improvement on both special teams. They are a team that harnesses their speed and skill as well as anyone, driven by their engine on the blueline that might include the best top-four defence in hockey with Dougie Hamilton, Jaccob Slavin, Brett Pesce and Jake Gardiner.