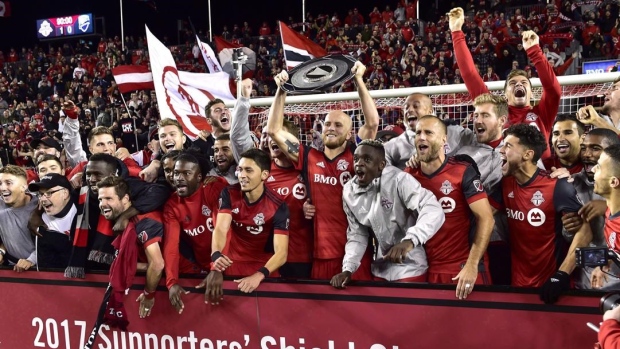 The Supporters' Shield will be presented to the MLS team with the best regular season record in 2020 after the Independent Supporters Council reversed a decision made last week to not hand out the annual award.

"You asked to be heard. In the end it was your input and votes that showed us this is the right choice. We had based our initial decision on the many schedule imbalances throughout the 2020 season. However, the conversations we have had over the last week have proven that a winner should be declared no matter what. this trophy has been designed, funded, and overseen by the supporters.

"Even through the challenges that 2020 has brought, our supporters have endured and shown their teams love and passion. We will ensure the legacy that began in 1999 continues. We would like to thank everyone who reached out to us and offered their voice during this process. Being able to have a conversation with you and work together to come to a solution has proved helpful, and your voice will continue to be heard. We look forward to your further involvement as the Foundation continues to grow. We hope everyone remains safe and healthy and wish the teams in contention good luck down the final stretch. The Shield is ready for you."

The Council announced on Saturday that the Shield — an award that is independent from Major League Soccer — would not be handed out due to the imbalance in the schedule caused by the ongoing COVID-19 pandemic. The decision itself, along with the timing, drew much angst amongst fans of teams in the hunt for the trophy.

Toronto FC held the best record in MLS at the time of the announcement with 38 points in 18 matches. Later in that night, the club defeated Atlanta United 1-0 to improve to 41 points in 19 matches.

"My players are pissed. It is a huge sign of disrespect to the players," TFC coach Greg Vanney told TSN's Kristian Jack following the initial announcement. "It has arguably been the most difficult season in the history of our league where people have put their health at risk to play and put games on television for fans. This season required a huge commitment from all the teams - people were genuinely afraid for their health. Its a disgraceful decision that delegitimizes the whole idea of the Shield in our opinion. Those made the decision are like kids in a park who take the ball away when the game isn't going their way. It's childish and a symbol that they don't know how sports operates."

On Monday, the ISC announced that they would review their initial decision.

Toronto FC are currently three points up on the Philadelphia Union for first place in the MLS with four games remaining. The two teams will play each other on Saturday night (7:30pm et/4:30pm pt on TSN).