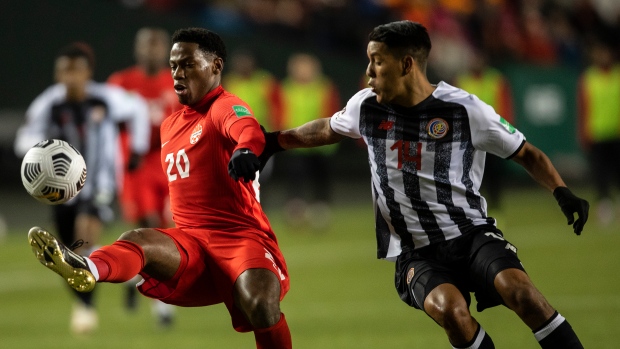 CONCACAF got a break Friday, with a draw determining that the fourth-place qualifier from North and Central America and the Caribbean will face a side from Oceania in a Qatar 2022 intercontinental playoff.

The draw at FIFA headquarters in Zurich paired teams from AFC (Asia) and CONMEBOL (South America) in the other playoff.

The intercontinental playoffs will determine the last two sides in the 32-country field for next year's World Cup. The single-game playoffs will take place in Qatar on June 13 and 14, 2022. Previously they were home-and-away series.

CONCACAF will likely heave a sign of relief at avoiding the fifth-place South American finisher. CONMEBOL teams have won seven of 10 playoffs, including six of the last seven. And Asia got the best of CONCACAF last time out.

New Zealand, at No. 110, is the top-ranked team in Oceania, ahead of the Solomon Islands at No. 141. The All Whites have represented Oceania in the last three playoffs, winning once.

The Canadian men, who had six games remaining, will look to avoid the playoffs by finishing in the top three come March,

The playoffs were originally scheduled for March 2022 but were rescheduled due to the pandemic.

CONCACAF teams have won three of six playoffs, with Mexico advancing in 1962 and 2014 and Trinidad and Tobago in 2006.

Australia beat Honduras 3-1 on aggregate while Peru downed New Zealand 2-0 in two-game playoffs in November 2017 to qualify for the 2018 World Cup in Russia.

In the intercontinental playoffs ahead of the 2014 World Cup in Brazil, Mexico thumped New Zealand 9-3 on aggregate and Uruguay blanked Jordan 5-0.

New Zealand was successful in making the 2010 World Cup in South Africa edging Bahrain 1-0. Uruguay defeated Costa Rica 2-1 in the other playoff.

In the European playoffs also drawn Friday, it will be Scotland versus Ukraine, Wales versus Austria, Russia versus Poland, Sweden versus Czech Republic, Italy versus North Macedonia and Portugal versus Turkey.

The 12 teams are competing for three World Cup berths.

This report by The Canadian Press was first published Nov. 26, 2021