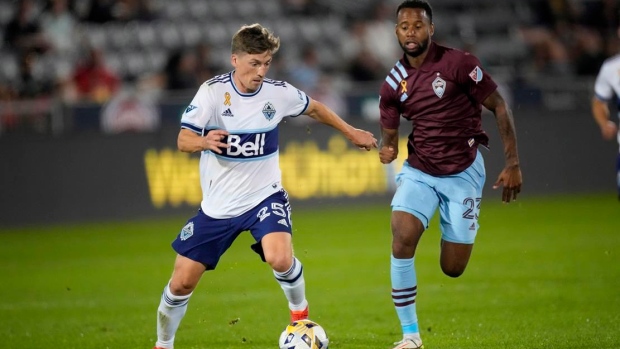 This weekend, though, will be the exception as the pair face off in Major League Soccer play for the first time.

“I’ll swap tops with him after the game and that," said Gauld, a 25-year-old native of Aberdeen. "It’ll be good to play against him. He’s been flying for them and just signed a new contract as well. I’m happy for him, but I hope he’s not too happy after Sunday."

Gauld said he chatted with Russell, a 31-year-old winger from Glasgow, before signing with Vancouver as a designated player at the end of July.

“He only had good things to say not only about Vancouver and the Whitecaps but about the league itself. He’s loved it ever since he came over," he said.

"There’s a perception kind of in Europe that this isn’t the best league, but I can see for myself since coming here how much quality’s in the league. The teams are really, really good.”

The Whitecaps have been quite good since adding Gauld to the roster. Vancouver is 6-2-4 in MLS play since the beginning of August and sit a single point below the playoff bar in the Western Conference.

Gauld has been a key piece in the club's attack, creating numerous chances and chalking up two goals and four assists in 12 games.

He's often fed striker Brian White, who has scored each of Vancouver's last six goals, including the 'Caps lone tally in a 4-1 loss to the Seattle Sounders last week. The 25-year-old American has 10 goals since being dealt to the 'Caps by the New York Red Bulls at the beginning of June.

Games at B.C. Place have been a particular strength for the Whitecaps this year. The 'Caps had to start the season playing out of Sandy, Utah, due to pandemic-related border closures but have gone 5-1-0 since returning to their home stadium on Aug. 21.

Stockpiling wins at home will be crucial in the final push for a playoff spot, he added.

The Whitecaps haven't made the post-season in three years, but interim coach Vanni Sartini thinks his group needs to be optimistic about snapping that drought.

"I think our mentality should be ‘Hey, the prize is there and we have everything to win,'" he said. "So that’s the beauty of playing in this league. There’s no relegation so you don’t have too much to lose at stake, you have a lot to win."

While Vancouver may need to wait to find out whether its clinched a playoff berth, Sporting KC sit second in the Western Conference and could earn their spot this weekend with a win or a tie against the 'Caps.

The visitors have already defeated the Whitecaps once this season, taking a 3-0 decision in Kansas City back on May 16.

Sporting comes into Sunday's match having won four of their last five outings, including a 4-2 victory over the Houston Dynamo last week.

Kansas City has 51 goals on the season, more than any other team in the West, and 10 have come from Russell. The Scottish winger has scored in five consecutive games.

While the Whitecaps feel good heading into Sunday's matchup, they group knows it's in for a battle against Sporting, Sartini said.

"We know it’s going to be really hard because, in my opinion, they’re one of the best teams in the league," the coach said. "But we’re up to the challenge.”

RETURN OF THE MAX: Whitecaps star 'keeper Maxime Crepeau has returned from playing World Cup qualifying matches for the Canadian national team. The 27-year-old native of Greenfield, Que., is on a 332-minute shutout streak in MLS play and has six clean sheets this season.

HISTORY BOOKS: Kansas City is unbeaten (5-0-1) in its last six games against the 'Caps. Sporting has won the last three matchups in Vancouver, including their last visit to B.C. Place back on Feb. 29, 2020.

This report by The Canadian Press was first published Oct. 15, 2021.