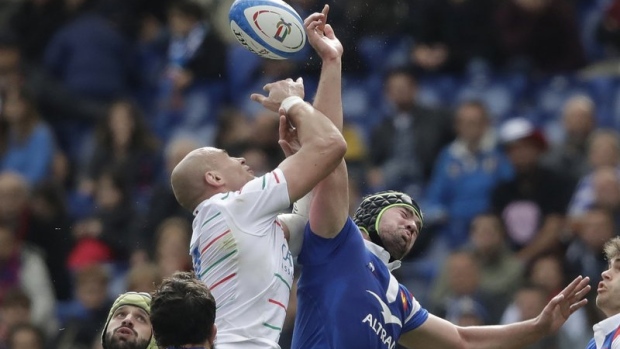 OSAKA, Japan (AP) — Sergio Parisse’s run at the Rugby World Cup has been more like a marathon than a sprint.

The 36-year-old backrower will join his former teammate Mauro Bergamasco and ex-Samoa midfielder Brian Lima as the only players to compete in five Rugby World Cups when he leads Italy out against Namibia in a Pool B game on Sunday at Hanazono Rugby Stadium.

Parisse’s career highlights are a testament to his longevity in the rough-and-tumble sport. The match against No. 23-ranked Namibia will be his 141st cap, moving him level with Ireland’s Brian O’Driscoll in second place on the all-time list, seven behind former New Zealand captain Richie McCaw’s record for most international appearances.

But there’s a lingering statistic that he wants to improve. The Italians have never progressed out of the pool stage at the Rugby World Cup, and the prospects this time are daunting in a group containing defending champion New Zealand and South Africa — which have a combined five titles — Namibia and Canada.

The Italians have lost eight of their nine tests in 2019 — the only win coming against No. 20-ranked Russia — and are 1-2 in head-to-heads with Namibia, although the two losses were in 1991.

Parisse made his World Cup debut against New Zealand as far back as 2003, when he was still a teenager, and played four games at each of his first three World Cups. Injuries restricted him to just one start four years ago in England.

“The fifth — I hope it will be my best,” Parisse said on Friday. “The first World Cup was a huge match and I will never forget my first try against Canada in 2003. The 2007 edition in France left me the most disappointed, as we had a really good chance of qualifying for the quarterfinals but we lost to Scotland.

“I’m nearer the end of my career than the start, I’m aware of this, but I’m not going to start thinking about it. It is something to be proud of, but my main aim is to think about helping the squad.”

“He is probably the best Italian rugby player of all time,” O’Shea said. “He never thinks about himself, only about the team.

“Maybe it is his last World Cup. I hope for him and the rest of the squad that it is his best.”

O’Shea made nine changes to the starting lineup which lost 37-0 to England on Sept. 6, saying it was crucial to start with wins over Namibia and Canada before thinking about the All Blacks and Springboks.

“We need to show our true level, our true ability and try our best to meet our ambitions,” he said. “That starts against Namibia.”

Namibia is contesting its sixth World Cup and has a 0-19 record, making it the team with the most number of games without a win at the tournament.

In the injury-enforced absence of Johan Deysel, lock Tjiuee Uanivi will lead Namibia into its first test since June. Darryl De La Harpe was selected in the centers to make his 50th test appearance.

“In the next four weeks we’ll be judged on how well we’ve done over the past four years,” head coach Phil Davies said. “We’re in a good position. We know we’re fit enough. We have an adaptable way of playing and it’s a great opportunity, a great challenge.