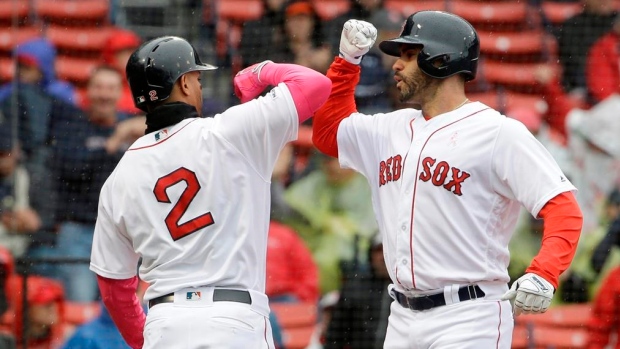 BOSTON — J.D. Martinez made hitting look easy even in the lousy weather conditions by belting his first two home runs of the season at soggy Fenway Park.

"Is that right?" Martinez said when informed they were his first long balls at home this year. "I didn't even know that. Definitely weird. I've always liked hitting here and always enjoyed playing in this ballpark. For that, definitely weird."

It was the fifth straight win and 16th in 22 games following a slow start for the defending World Series champions. Martinez, who has seven homers, finished with three RBIs and scored three runs. Chavis hit three singles.

"We knew we could get to this point," Red Sox manager Alex Cora said. "It was just a bad stretch."

Playing in steady light-to-moderate rain the entire time with temperatures in the mid-40s, the Mariners made five fielding blunders in the first three innings. Boston even had a few baserunners that appeared somewhat cautious in the conditions.

"It was tough," Martinez said. "It definitely wasn't baseball weather if you ask me, but we found a way to get it done."

Trailing 1-0, the Red Sox scored three runs with two outs in the first. Martinez got it started with his homer into the Monster seats off Marco Gonzales (5-2). Xander Bogaerts walked and Rafael Devers singled before Chavis hit a bloop to shallow right that second baseman Shed Long overran. Then he slipped and fell when he tried to retreat as the ball dropped in for an RBI single.

Devers scored on Narváez's passed ball to make it 3-1, and he appeared to step gingerly on the slippery plate.

In the second, Seattle right fielder Jay Bruce dropped Mookie Betts' fly ball, allowing Andrew Benintendi to score to make it 4-1. Long also dropped a pop the next inning, but got a force out.

"Both teams had to play in miserable conditions out there," Mariners manager Scott Servais said. "Obviously, not a good series for us. Rough road trip. We've got to get back home and kind of regroup and go from there. But it was nasty, nasty conditions out there."

Chavis had a two-run single in the fifth, and another in the seventh. Martinez's second homer also cleared the Monster.

"I thought that the mound was OK," he said. "I thought it was a little muddy and sticky at times, but again, I don't think that's an excuse for the amount of pitches."

Red Sox: Cora said LHP David Price (left elbow tendinitis) threw a bullpen. The manager said after the game that Price will throw another bullpen this week and could start for Boston over the weekend or next week. . Cora also said 2B Dustin Pedroia felt some minor soreness in his balky left knee and didn't play Saturday on his minor league rehab assignment. "In his own words, he was 'just being smart,'" Cora said. "Hopefully, it's nothing."

Seattle 3B Tim Beckham went near the seats trying to catch a foul pop and watched the ball bounce on the dirt. It was ruled no play by the official scorer. ... Boston 1B Steve Pearce booted a grounder.

The grounds crew spread drying agent around the basepaths and mound, raking the areas many times. Plate umpire Quinn Wolcott did his part by wiping the plate with a towel.

"The grounds crew did an outstanding job," Cora said. "That was amazing for us to play all nine innings."

Mariners: LHP Yusei Kikuchi (2-1, 3.54 ERA) is set to start the opener of a two-game series Monday at home against Oakland.

Red Sox: Off on Monday before LHP Chris Sale (1-5, 4.50) is slated to start Tuesday versus Colorado. He fanned a season-high 14 over eight innings and allowed one run in a no-decision Wednesday at Baltimore.