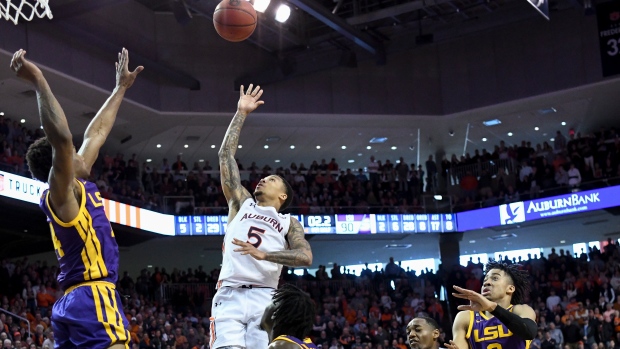 AUBURN, Ala. -- J'Von McCormick hit a floater with 0.1 second left in overtime to lift No. 11 Auburn to a 91-90 win over No. 18 LSU in a dramatic Southeastern Conference showdown Saturday.

Auburn (21-2, 8-2 Southeastern Conference) rallied from a 14-point second half deficit and moved into a tie with LSU (17-6, 8-2) for the league lead. It's Auburn's third overtime win in the last four games and this one took 18 3-pointers.

McCormick drove toward the basket in the final moments for the game-winner. It came after Skylar Mays and Emmitt Williams led an LSU comeback from a quick seven-point deficit in the extra period.

Mays scored on two free throws and a drive then had a steal and dished to Williams for a dunk and the lead with 11 seconds left.

Samir Doughty led Auburn with 26 points and made five 3-pointers. McCormick just missed a triple double with 23 points, nine rebounds and nine assists. He made three consecutive 3s during a key straight to help force OT.

Devan Cambridge made seven 3s for 21 points after failing to score in the last four games since a career-high 26 against South Carolina.

Mays led all scorers with 30 points while also collecting eight assists and seven rebounds. He scored nine in overtime.

Darius Days had 19 points before fouling out.

Doughty and Cambridge both capped big games with a pair of 3s in overtime before LSU staged its own rally. Auburn helped by missed three of four free throws down the stretch.

LSU: The Tigers have lost two straight, including a 99-90 defeat at Vanderbilt on Wednesday. Outrebounded Auburn 46-36 and shot 47%.

Auburn: Made 18 of 44 3s (41%). Reached 21-plus wins for the third straight season, a program first. Had a drama-packed week, having beaten Arkansas in overtime after rallying from an 11-point deficit in the final six minutes of regulation.

Days and McCormick got off to big starts for their respective teams. Days had 13 points and three 3-pointers in the first 10 minutes, topping his 11-point average. McCormick scored eight of Auburn's first 12.