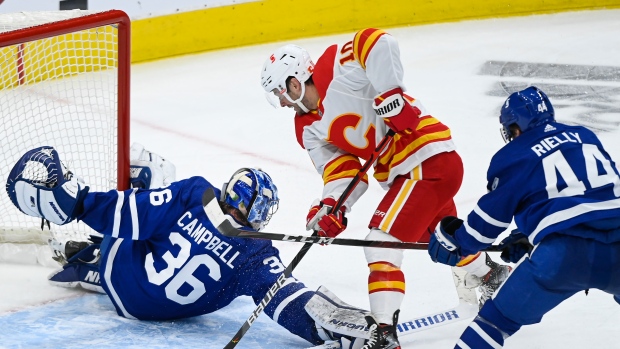 TORONTO — Jack Campbell has watched a lot of hockey the last few months.

The Maple Leafs' backup goalie missed 14 games after hurting his leg in January before aggravating the injury as soon as he returned to the lineup. Another three weeks on the sidelines followed as Campbell again worked to get healthy.

Campbell made 31 saves to record his second shutout of 2021 as Toronto defeated the Calgary Flames 2-0 to end an ugly 1-6-0 run that saw the North Division leaders reeled in by the pack.

"It's been a frustrating season personally," Campbell said. "But I felt really confident."

Jason Spezza and Zach Hyman scored for Toronto (20-10-2), which also snapped a three-game losing streak. The regulation victory was the Leafs' first since completing a dominant sweep of the Oilers in Edmonton on March 3.

Toronto had a nine-point lead atop the division at the time, but entered Saturday tied with the Oilers for first on points with two games in hand. The Winnipeg Jets, meanwhile, were two points back with a game in hand.

"Just a really gritty effort by the group," Spezza said. "(Campbell) coming in, shutting the door, he made a lot of big saves."

Leafs stars Auston Matthews and Mitch Marner — both held off the scoresheet on this night — had quiet words for Campbell before Toronto headed to the locker room to celebrate a much-needed result.

"Basically they're proud of my battling through the adversity," Campbell, who improved to 4-0-0 with a .965 save percentage this season, said of the message. "It's been a long road and tough year with the injury, but those guys mean the world to me.

"It makes me more motivated to play next game."

"I would rather say I outplayed Jack Campbell, but he outplayed me," Rittich said. "He was really good."

Starting for just the second time since getting injured in Calgary on Jan. 24, Campbell didn't have a lot to do early, but grew into the game after a string of shaky outings from struggling No. 1 option Frederik Andersen.

Campbell was backed up by Michael Hutchinson with Andersen, who has been dealing with a lower-body injury and is just 2-5-0 with an .876 save percentage since returning to the lineup, unavailable following Friday's 14-save performance.

"We have a ton of confidence in him," Hyman said of Campbell. "He saved every shot, so it makes our life a lot easier."

Rittich, meanwhile, came in 1-0-1 against the Leafs this season after stopping 71 of 73 shots in another two-game set between the teams last month, but sat at the end of the bench as Jacob Markstrom started the first seven games of Darryl Sutter's second tenure as head coach.

Having watched Andersen allow goals on two of the first four shots he faced Friday, Campbell was solid early to settle a team that's suffered through miserable starts during its shaky run.

Toronto scored first for just the second time in its last eight games when Spezza snapped his seventh — and second in as many nights — after Jake Muzzin made a good read to keep the play alive at Calgary's blue line. Spezza, who rang a shot off the iron moments earlier, collected a bouncing puck down low before firing upstairs on Rittich as the Leafs breathed a massive sigh of relief by taking a 1-0 lead into the intermission.

Coming off Friday's result where they managed only 18 shots, including just two in the third, the Flames had a couple of chances early in the second, but Campbell was there to deny both Elias Lindholm and Andrew Mangiapane.

Toronto's netminder, who picked up the fourth shutout of his career, then stopped Derek Ryan on a short-handed chance after William Nylander turned the puck over in the neutral zone.

Matthews blasted a shot off the post later in the man advantage with Rittich at his mercy before Muzzin also found iron moments after the penalty expired as the Leafs continued to lead 1-0.

The home side would finally get a two-goal lead — Toronto's first since that three-game series in Edmonton — with 3:32 left in the period on a great individual effort from Hyman. With defenceman Morgan Rielly driving hard through the middle and occupying two Flames, the winger took the puck around Calgary's net and fired a shot through Rittich for his 11th of the campaign.

Leafs blueliner Justin Holl's deflected shot then hit another Calgary post in the third before Matthews was denied on the follow-up with another shot that struck iron.

Campbell then denied Matthew Tkachuk with a terrific double pad stack save on a Calgary power play with under five minutes left in regulation to keep the shutout intact and get the Leafs back on course.

"We had a tough stretch there, but we're still in good shape as long as we keep building in the right direction."

Notes: Hyman has seven goals in his last 11 games. Alex Galchenyuk picked up an assist for his first point with Toronto. ... The Flames conclude their four-game road trip with a pair in Ottawa against the Senators on Monday and Wednesday. ... The Leafs' next contest goes Thursday in the nation's capital before Edmonton visits Toronto for two.

This report by The Canadian Press was first published March 20, 2021.