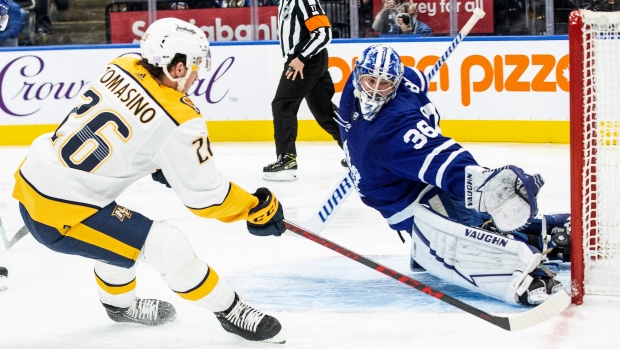 TORONTO — Sheldon Keefe is running out of adjectives to describe Jack Campbell.

One word, however, continues to surface — consistency.

The Maple Leafs goalie made 24 saves to register his third shutout of the campaign in his 100th regular-season NHL appearance Tuesday as Toronto defeated the Nashville Predators 3-0.

Coming off a stellar 2020-21 where he set a league record for wins to start the schedule, Campbell was expected to share the crease with free-agent signing Petr Mrazek.

But with the latter having made just two appearances because of a groin injury, all the 29-year-old has done is stake his claim night after impressive night.

"That was the question, right?" said Keefe, who's in his third season as Leafs' head coach. "Can you do it again? Can you do it as the No. 1 guy and playing more frequently? There hasn't been the partner that we intended.

Auston Matthews and David Kampf each had a goal and an assist for Toronto (11-5-1), which has won nine of 10 following an ugly four-game losing streak. Mitch Marner added his team's third into an empty net after the Leafs locked things down over the final 20 minutes.

"We've been pretty comfortable in these tight games," Matthews said. "That third period is something that we'd like to obviously replicate."

The Predators returned to Scotiabank Arena for the first time since March 12, 2020, when they were supposed to play the Leafs before the NHL suspended its schedule because of the COVID-19 pandemic.

"I don't think it was our best game," Nashville defenceman Mark Borowiecki said. "They outplayed us for long portions."

Campbell improved to 9-3-1 on the season, and is 3-0-0 with two shutouts and a .989 save percentage over his last three starts.

"I can't say enough good things about Soup," Matthews said of the netminder acquired via trade from the Los Angeles Kings in February 2020. "He's been so good for us ever since he's got here. I could go on and on, but just his attitude every day, comes to the rink with a smile on his face.

"He competes for us every night."

Campbell had a rough beginning to his career after being selected 11th overall at the 2010 NHL draft by the Dallas Stars. But he eventually rediscovered his game in L.A., and has taken things to new heights in 2021.

"The teammates here, and the coaches, are just amazing," said Campbell, who now has seven career shutouts. "Just really grateful."

Keefe was also glad to see Kampf and Ondrej Kase — off-season signings and childhood friends back in the Czech Republic — get rewarded by combining for the Leafs' second goal that provided some third-period breathing room.

"I don't think that they care whether or not they score," said the coach. "They just know what they need to bring and what they need to do for the team. They're gonna lay out there every night. These guys don't cut corners.

"These guys are just here to serve the team and help our team win. They've brought tremendous value."

Toronto, which honoured Dion Phaneuf before puck drop after the team's former captain announced his retirement earlier Tuesday, jumped out to a 1-0 lead at 7:37 of the opening period after Nashville hit the post a minute in.

William Nylander, who saw his six-game point streak snapped in Saturday's 5-4 victory over the Buffalo Sabres, found Matthews with a cross-ice pass, and he beat Saros shortside for his seventh goal of the season.

Matthews had another great chance on a 2-on-1 break with Marner after Nick Ritchie levelled Nashville defenceman Mattias Ekholm along the boards, but Saros stretched to make an outstanding stop.

Leading the Predators with nine goals, Matt Duchene rang a shot of one of Campbell's posts a minute into the middle period as the visitors found iron a second time.

Nashville got a power play after Ritchie took a retaliation slashing penalty, but Campbell denied Roman Josi from the slot.

Toronto appeared to go up 2-0 at 4:35 on a scramble in front when Matthews' shot hit the crossbar, then the post and stayed out on a sequence that was initially called a goal before being overturned.

"It felt like it hit three different posts," Matthews said. "I thought maybe we'd get lucky on that one, but it happens."

Nashville hit another post early in the third when Thomas Novak came close on a backhand as Campbell was again bailed out by the iron.

"There's times when we let people in behind us," Keefe said. "We've got to clean that up, but Jack made saves, posts were on his side."

Saros then denied Nylander on a break to keep the Predators within one with the teams playing 4 on 4.

Campbell kept the shutout alive and Toronto ahead midway through the period when he stopped Josi again from in close.

The Leafs couldn't get anything going on a power play with six minutes left in regulation, but Kampf sealed it with his third with 3:56 left off a Kase pass before Marner scored his fourth into the empty net.

"The team played so hard in front of me," Campbell said. "Really lucky to play behind the blue guys tonight."

The Leafs would say the same about suiting up in front of their standout goaltender.

Notes: Toronto reacquired Kyle Clifford from the St. Louis Blues for future consideration Tuesday. The Leafs originally traded for Campbell and the grinding winger in the same deal. ... Toronto hosts the New York Rangers on Thursday before welcoming the Pittsburgh Penguins on Saturday to wrap up a stretch of nine of 11 games at Scotiabank Arena. ... The Predators were supposed to play Thursday in Ottawa, but that contest was among the three postponed this week because of the Senators' COVID-19 outbreak. Nashville visits the Montreal Canadiens on Saturday.

This report by The Canadian Press was first published Nov. 16, 2021.