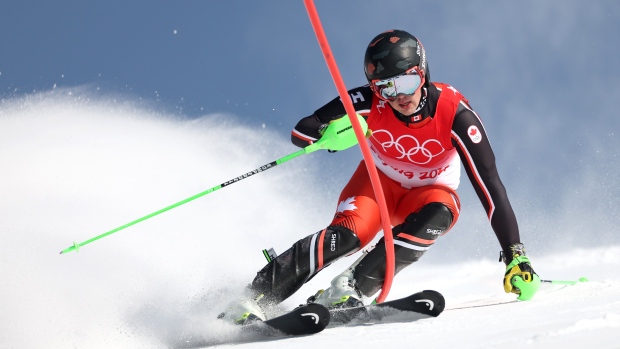 BEIJING — Jack Crawford just kept pushing himself through each subsequent event of the Beijing Olympics until he finally reached a podium.

The Toronto native won bronze in men's Alpine combined at the Beijing Olympics on Thursday after missing out on a medal in his first two events of the Games. He was fourth in the men's downhill on Monday — missing the podium by seven hundredths of a second — and then placing sixth in the men's super-G on Tuesday.

"For me, that has really helped allow me to push and be in a place where anything can happen on any given day."

That mindset was apparent on Thursday morning, when he had the second-best time in the downhill portion of the Alpine combined event, finishing in one minute 43.14 seconds. In the afternoon he then skied a 48.97 in the slalom portion, finishing third with a total time of 2:32.11 for Canada's first-ever medal in Alpine combined.

"I’ve always had speed. I’ve always been contending on splits and downhill and super-G for the last couple of years, but I haven’t had the experience to bring it from top to bottom on a consistent basis," said Crawford. "This year, with a couple of tweaks to my equipment and to my skiing style and just my overall approach has allowed me to come out of the gate every single time and be a contender."

Johannes Strolz of Austria won gold with a total time of 2:31.43, while Aleksander Aamodt Kilde of Norway took home the silver in 2:32.02.

The Strolz name may be familiar to long-time Alpine combined fans. His father, Hubert Strolz, also won gold in the skiing discipline at the 1988 Calgary Olympics.

"It's really a great moment for me, and I'm so thankful that I finally can live my dream and have this gold medal in my hands like my father did in 1988 in Calgary," said the younger Strolz.

"(My father) just told me to enjoy the journey at the Olympics from the opening ceremony to the competition and just enjoy it, go for it."

Broderick Thompson of Whistler, B.C., finished the downhill segment in 1:44.39 before a 49.81 in the slalom to place eighth overall.

Brodie Seger of North Vancouver, B.C., who was third after the downhill, finished ninth. He added a 51.49 in the slalom to his 1:43.54 in the downhill.

Seger said he hadn't put on slalom skis in about two years but when he arrived in the Yanqing zone of the Beijing Games he saw that he had a chance to make an impact in the Alpine combined.

"I was definitely never one of the guys earmarked for the combined, that's why I haven't skied any slalom in the last two seasons actually," said Seger between his downhill and slalom runs. "I'm really happy that I got the job done more or less in this downhill run and put something good together."

Calgary's Trevor Philp had a time of 1:46.84 earlier in the day before failing to finish the slalom.

Crawford said he "couldn't ask for more" after winning an Olympic medal. But even then at the post-race news conference the 24-year-old was casting his eyes to the 2026 Milano-Cortina Games.

"Moving forward into the next Olympics, I just hope that I can take what I’ve done here and continue pushing and continue my career," he said. "But before that happens I’m definitely going to take some time off at home and relax with my girlfriend, my family, and just celebrate this as best as I can.

"I don’t think it’s going to sink in until I actually get home."