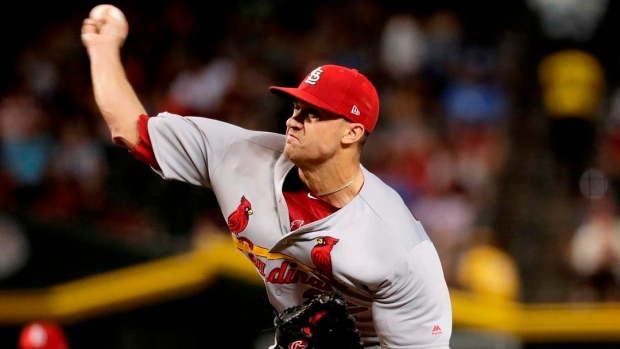 "To be on the attack consistently," the 24-year-old Flaherty said Sunday at the Cardinals Winter Warm-Up. "That's what he preached. He said he was consistently on the attack no matter the situation and no matter what was going on. Pitching inside, too. He did that. He doesn't think he ever hit anybody. They hit themselves because they were looking out over the plate."

Those thoughts served Flaherty well in 2019.

Last year was a breakout season for Flaherty. He blossomed into one of the top starters in baseball. At the midpoint of the season, Flaherty was treading water at 4-5 with a 4.90 ERA in his first 17 starts. That changed in the second half.

Following the All-Star break, Flaherty produced a 0.91 ERA. He earned Pitcher of the Month honours in August and September.

"It was impressive for a younger guy or for anybody to do as well as Jack did in the second half," St. Louis manager Mike Shildt said. "I don't think people would argue that it was probably the best second half performance from a pitching standpoint. He got there by being very intentional about what he did. Jack just looks and seeks every day to just get better. He strives to get better physically, emotionally and mentally and all the things that come with that."

He became the third-youngest pitcher in baseball history to strike out at least 230 and walk 55 or fewer with a 2.75 ERA or lower. Following the season, he was nominated for his first-ever Gold Glove and finished fourth in National League Cy Young Award voting.

Reliever John Brebbia marveled at what Flaherty accomplished in 2019.

"It was almost surreal, even being in the bullpen as far away as I am. You watch how he did in the second half and you think no one's ever been this good," Brebbia said. "They couldn't have because this was as good as it gets. If you get to see him and how he prepares every day and what is attitude is every day towards the game of baseball, if you had to peg one person for being the best pitcher you've ever seen in that second half, it's going to be him. There's no getting around his drive and his consistency and how well he prepares for each outing."

Trying to match those numbers is not what motivates Flaherty.

"I don't think it's about going higher. It's just about trying to stay consistent," Flaherty said. "I want to take the same approach day in and day out and not try to do anything more."

Gibson is not the only one Flaherty credits with helping him become a better pitcher.

A death of a close friend fueled Flaherty's rise in the second half of the season. Flaherty’s friend Tyler Skaggs, a 27-year-old Angels pitcher, died July 1. Skagg's death was ruled an accident while under the influence of drugs and alcohol.

Flaherty and Skaggs were both from California. The two worked out together in the off-season.

"It literally fell right in line with it," Flaherty said. "He passed away and I threw in Seattle the next day. From there, it was San Francisco and then the All-Star break and from there, it kind of took off. You could kind of feel and tell that when something goes on like that that someone is looking out for you and watching over you."

Shildt met Flaherty for breakfast Sunday before they signed autographs for the fans.

"It was really just catching up. It's more about spending time with Jack," Shildt said "It was more about how you doing, what's life look like and just connecting with him on a personal situation."

Shildt believes Flaherty will post another fine season for the Cardinals.

"He's obviously a super talented guy, a super smart guy who's looking to evolve," Shildt said. “He's also able to take advantage of other people's experience to give him information. It's well documented people like Gibby, Carp and Waino (Wainwright), he's sought them out. He just needs to continue to grow and stay hungry which I don't think will be a problem for Jack.”