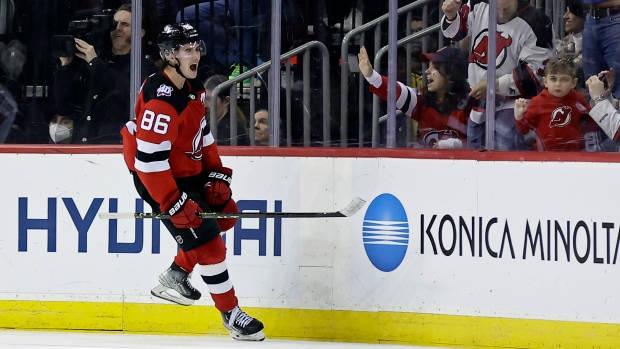 “It’s exciting,” Hughes said. “Couple of two-goal games in my career, so nice to cap it off with the third one tonight.”

Ruff became the fifth NHL coach to reach the mark. The former Buffalo player won 571 games with the Sabres from 1997-2011. He had 165 wins in five seasons with Dallas and has 64 in two-plus seasons with New Jersey.

“It means I’ve been around a long time,” Ruff cracked. “Great to win the game. Again, you got to do a lot of right things, have good teams, and the way our team is playing I have to give them a lot of credit for getting me there.”

The Atlantic Division-leading Devils have won two in a row after having their franchise-record 13-game winning streak snapped by Toronto.

John Carlson scored for Washington and Charlie Lindgren made 24 saves.

“Not scoring goals, not capitalizing on our chances,” Carlson said. “We’ve had our chances, especially today, but we only walked away with one goal. We could have had five or six. It’s just not going in right now.”

Vanececk, meanwhile, was hoping for the shutout against a familiar foe.

“That would have been nice, but that’s hockey,” Vanececk, “For sure you’re trying, but not every time; the win is more important.”

Hischier opened up the scoring with his 10th goal of the season midway through the first period on a power play after Alexander Ovechkin was called for slashing.

Hughes wrapped the puck around goalie Lindgren’s right leg and the goalpost to put the Devils up 2-0 5:59 into the second period. Hughes appeared to have lost his angle on the goal when he ripped a shot off Lindgren’s face mask and into the net midway through the period to for his 10th goal of the season and give New Jersey a 3-0 lead.

The 2019 No. 1 overall pick added his third midway through the third period as hats rained down on the ice with New Jersey up 4-0.

“You want to continue to play the right way but if an opportunity comes you want to definitely put it in the back of the net with authority,” Hughes said. “So tonight, I was able to cap it off and It was nice.”

Fabian Zetterlund capped the scoring for New Jersey late in the third period.

NOTES: The Devils improved to 16-0-0 this season when Hischier has a point. New Jersey’s Nathan Bastain (upper body) did not return after the first period.…Ovechkin is still nine goals away from 800 and 11 from passing Gordie Howe for second place on the NHL goals list.

Capitals: At Vancouver on Tuesday night.

Devils: At the New York Rangers on Monday night.