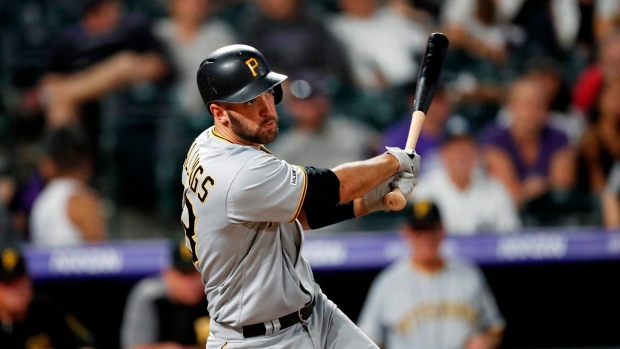 BRADENTON, Fla. — The son's stay in town has outlasted the father's. The irony isn't lost on Jacob Stallings.

It wasn't necessarily supposed to be this way. Stallings was still a catching prospect — and not necessarily a young one — in the Pirates' organization four years ago when his dad Kevin left a successful run as the men's basketball coach at Vanderbilt to take on the same job at the University of Pittsburgh.

The marriage between the elder Stallings and the Panthers lasted all of two nightmarish seasons. By the spring of 2018, Pitt moved on. It seemed the younger Stallings might meet the same fate. Pittsburgh designated for him assignment several times as he pogoed between the minors and the majors after making his debut in 2016. The odds of him ever sticking in Pittsburgh seeming to grow more and more remote as his mid-20s turned into his late-20s.

Yet rather than worry about it, Stallings buried himself in the game. When he spent the first half of 2019 as the third catcher while Elias Diaz and Francisco Cervelli battled with injuries, Stallings won over members of the starting rotation with his willingness to do whatever, whenever on the off chance the two might find themselves working together when it mattered.

“He was very in tuned to what each guy is doing every day,” pitcher Trevor Williams said. “And it was specific to each pitcher. If it was my bullpen day, he was all in on my bullpen day and then he'd immediately go with that and then go watch video with a guy who was two days out. He's a guy that really cared about his battery mate, really wanted to help us be the best pitchers, the best versions of ourselves possible.”

And now, two months past his 30th birthday, Stallings arrived at spring training last week as the most experienced catcher in the organization after Cervelli and Diaz exited last year.

“He's a guy that's grinded and works hard and he pays attention to what's important in the game today," first-year Pirates manager Derek Shelton, an admittedly “bad” former minor-league catcher, said. "He's a guy that's an elite framer and that's extremely important in how we value catching and how we valued the pitcher/catcher relationship. I think it's a testament not only as a player as a person.”

A person that felt Pittsburgh's struggles during a second-half freefall to last place in the NL Central a little more acutely than most. Owner Bob Nutting gutted the team's management structure in the aftermath, firing manager Clint Hurdle, general manager Neal Huntington and president Frank Coonelly. Watching it unfold hit close to home.

“I think the narrative right now is the previous staff and front office is getting all the blame for that. I don't like that necessarily," Stallings said. “The fact of the matter is when things go well, the players get the credit. And when things go bad, the coaches get the blame."

Asked if he had a special appreciation for what Hurdle endured because of his father's experience at Pitt, Stallings nodded and said “for sure," though he added there are no hard feelings. His dad is enjoying playing golf and keeping tabs on his son, the one who is on the cusp of becoming an everyday starting catcher in the majors.

Though Jacob Stallings admits he's taking nothing for granted, he modified his off-season workout routine to help deal with a potentially heavier workload. He cut down the number of days he lifted weights each week from four to three — a decision he based on being on the other side of 30 — and spent more time working on his job as a receiver.

Pittsburgh's new regime is putting an emphasis on defence and run prevention, a shift that plays to Stallings' strengths. His glove, game-calling and attention to detail kept him around. That's not going to stop simply because he stepped onto the field at Pirates City as the presumptive starter. When new pitching coach Oscar Marin gave a presentation during the first days of camp last week, Stallings plopped himself in the front row, soaking up what he could while sneaking a peak at Marin's notes.

Stallings was struck by Marin's attention to detail, similar to the approach Stallings relied on to create the kind of opportunity that's now at his fingertips.

“I mean, it's a great story of perseverance,” starter Chris Archer said. “But if you ask him, he wants to be and do even better. Because just as quick as he got that opportunity last year, it can be taken away from any of us.”