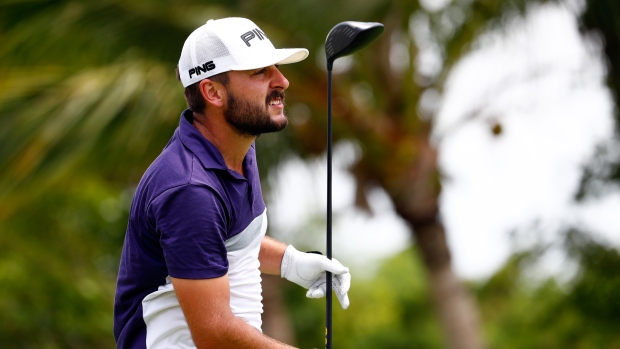 HAYWARD, Calif. — Stephan Jaeger shot a 12-under 58 on Thursday in the Web.com Tour's Ellie Mae Classic for the lowest score in major tour play.

The 27-year-old German player finished with a 10-foot birdie putt on the par-5 ninth at TPC Stonebrae.

"It went in a little fast for my liking," Jaeger said about his final putt. "On a day like that, it'll go in. ... Right now, I'm actually kind of happy to be done, to be honest with you. It's very stressful for you. It's kind of like going on the back nine on Sunday. I'm happy I performed the way I did. It was the icing on the cake, the last hole obviously."

Japan's Ryo Ishikawa also shot a 12-under 58 to win the 2010 Crowns on the Tour. Jaeger broke the Web.com Tour record of 59 held by Notah Begay III, Doug Dunakey, Jason Gore, Will Wilcox and Russell Knox. Six players have shot 59 on the PGA Tour, and one on the PGA Tour Champions.

"Everything went well," Jaeger said. "I was driving the ball well. I was making everything. I got the good breaks."

He was thinking about breaking 60.

"It pretty much was in my head the whole back nine," Jaeger said.

"We had a good strategy for that hole," Jaeger said. "I was going to play it as a three-shot hole and take the bunker out of play off the tee and at worse make par."

Jaeger came to the United States as a foreign exchange student in 2006. He went to high school for two years in Chattanooga, Tennessee, and played in college at Tennessee-Chattanooga.

"Even the bad shots, I'd get a good bounce and have like 15 feet and I'd hole that," Jaeger said.

"Other than that, everything went my way," Jaeger said.

Josh Teater, Xander Schauffele and Rhein Gibson were tied for second at 62.

Stanford senior Maverick McNealy, the top-ranked amateur in the world, had a 67.