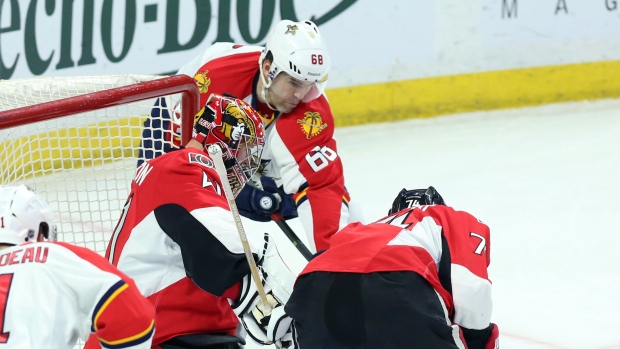 OTTAWA - The Ottawa Senators have gone from nearly unbeatable to beaten.

Jaromir Jagr had two goals and Dan Ellis made 25 saves on Sunday as the Florida Panthers defeated the Senators 4-2, handling them their third straight loss after a stretch that saw them win 15 of 17 games and collect points in 16 of them.

The win pulled the Panthers (35-26-15) to within a single point of Ottawa (37-26-12) for ninth in the Eastern Conference. The Boston Bruins currently hold down the eighth and final playoff spot in the East, three points up on the Senators following a 2-1 overtime win over the Carolina Hurricanes Sunday.

"They have to be able to fight their way through it," Senators coach Dave Cameron said of his team's sudden rough stretch.

"We've been pushing and have had a lot of Game 7's lately and it's probably taking it's toll. It's that time of year."

Jussi Jokinen and Dave Bolland also scored for the Panthers.

"It was a big game for us obviously," Florida's head coach Gerard Gallant said. "It's a tight race and we want to stay in that race so we had to win, so we're staying around."

Erik Karlsson and Jean-Gabriel Pageau found the back of the net for the Senators while Craig Anderson made 33 saves.

Trailing 2-0 entering the third period, Karlsson got the Senators on the board with a power-play goal at 4:43. It was just the second time in the last 34 opportunities at home that Ottawa converted on the power play.

Karlsson took a shot from the point that found its way through four bodies and past Ellis.

After drawing Anderson out of the net with a fake shot, Jagr scored his second goal of the game at 13:57 on a wraparound to give the Panthers a 3-1 lead.

"It's our line's job to score goals and luckily we did it," Jagr said. "This was a Game 7 for us and now we have to get ready for the Next Game 7 against Boston (on Tuesday)."

Pageau scored at 17:39 for the Senators before Bolland iced the game with an empty-net goal.

After a scoreless first period, Florida took advantage of Ottawa's penalty troubles in the second by scoring twice with the man advantage.

Jagr opened the scoring at 7:36 when he cut to the front of the net and beat Anderson through the legs with a shot from the hash marks.

That goal came with Senators defenceman Eric Gryba in the penalty box for interference. Gryba was again in the box, this time for roughing, when Jokinen scored at 15:49 to give the Panthers a 2-0 lead.

Jokinen was in the slot when he took a pass from Dave Bolland and fired a shot past the glove hand of Anderson.

"It was one of those games where it went back and forth," Anderson said. "There were times when it seemed like we couldn't get anything going and there were other times we were taking it to them pretty good and didn't get rewarded."

The Senators did have some chances in the first period but Ellis made big stops off Alex Chiasson and Pageau in close and also got some help as Mark Stone hit the crossbar.