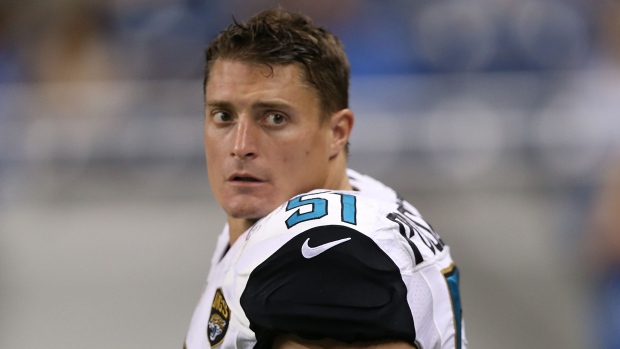 JACKSONVILLE, Fla. - The Jacksonville Jaguars will be without leading tackler Paul Posluszny for the rest of the season.

Posluszny tore a pectoral muscle in his chest during Sunday's 24-6 win against Cleveland and will be placed on injured reserve.

"It's a big loss," coach Gus Bradley said. "He's been really playing really well lately. Well, he's been playing well ever since I've been here, but I think he's come into his own, really understands the defence now, really takes total command of the defence. That'll be a difficult one."

Posluszny sustained the injury while making a sack early in the fourth quarter, but stayed in the game. He finished with 12 tackles and a fumble recovery. The eighth-year pro leads the team with 69 tackles and has been the team's top tackler the previous three years.

The Jaguars (1-6) plan to replace him by moving fourth-year pro J.T. Thomas from outside to middle linebacker. Dekoda Watson will take over for Thomas.

Jacksonville doesn't expect to sign anyone off the street since it has seven linebackers, including Posluszny, on the roster. Rookie Jeremiah George, who was signed off the New York Jets practice squad, will serve as Thomas' backup.

"I do believe that we'll have guys step up and move on," Bradley said.

Jacksonville also will be without defensive end Andre Branch, who is expected to miss six weeks with a groin injury. Branch has 13 tackles and three sacks this season.

Losing Posluszny and Branch could be a significant setback for a defence that has played its best the last three weeks. The Jaguars have allowed two touchdowns and an average of 310 yards over the last three games.

"Any time you have injuries with guys that are playing well, it stings you a little bit," Bradley said. "We talked about being developmental coaches and allowing guys to develop within our system, so when opportunities like this present themselves guys can step in and we can move on."

With Branch sidelined, rookie Chris Smith, a fifth-round draft pick from Arkansas, could be promoted from the practice squad to replace Posluszny on the 53-man roster.