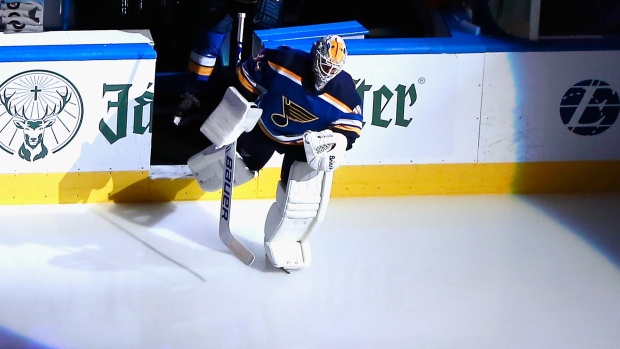 Montreal Canadiens general manager Marc Bergevin said he was willing to spend to get a backup goaltender, one of the top priorities on his off-season to-do list.

Turns out, it didn’t cost much to acquire Jake Allen, who can capably spell Carey Price to ensure Montreal’s $10 million man gets the proper rest.

Just a third-round pick – the one acquired from Washington for Ilya Kovalchuk, essentially found money anyway with his January signing – and some of the Canadiens’ ample cap space.

It was a win-win-win for Bergevin. Allen may just be the best backup in the NHL next season, in what figures to be an uncertain year with a condensed schedule chock full of back-to-back grinds and more slates of three games across four nights. He finished fourth in the league in save percentage this season among netminders with a minimum of 20 appearances.

Yes, the Habs might be spending $4 million more on goaltending than any other team next season, but Allen’s expensive deal has just one year on it and expires before Montreal runs into any sort of cap crunch.

Plus, the Blues moving Allen and his $4.35 million salary cap hit just happened to increase the cap space and chances St. Louis could afford to re-sign captain Alex Pietrangelo, which lessens the chance a Canadiens’ division rival like Toronto might be able to take a run at him in free agency.

“We’d love to get Alex signed,” Blues GM Doug Armstrong said Wednesday. “At the end of the day, it’s a math equation.”

So too is the NHL’s annual game of goaltending musical chairs. Allen became the first goalie domino to fall in an off-season unlike any other for the position. It’s going to be a wild ride.

“I understand the business side of it very well and I knew coming into this off-season after being eliminated that there was a chance I was going to be traded,” Allen said. “I didn’t really have an idea where or when, that kind of came out of the blue for me. I definitely knew that I was potentially going to be dealt.”

The Canadiens and Blues are a rarity in NHL circles. With Price and Allen in Montreal, and Jordan Binnington and Ville Husso in St. Louis, they are two teams who have now firmed up their tandem.

If I’m the Canadiens, I don’t just play Allen on back to back situations, I actually would give him consecutive starts at time to give Price full weeks of rest during the season. 50-55 games for Price next year would be the ideal range. He’s only making $9.75M next season!!!

There are only maybe six or eight other teams, at the very most, that have their goaltenders set in stone for next season.

In a league with 62 chairs up for grabs, less than half are spoken for in 2020-21. It’s a confluence of contracts expiring, a frozen salary cap and an impending expansion draft in which Seattle will have a crack at more than 30 NHL goaltenders next June.

The list of goaltenders up for grabs is astonishing in both quality and depth.

Then there are the goaltenders on the trade markets, including pending RFA with arbitration rights Matt Murray, Marc-Andre Fleury, Frederik Andersen, Henrik Lundqvist, Antti Raanta and one of Columbus’ two studs in Joonas Korpisalo or Elvis Merzlikins.

That’s three Vezina Trophy winners, three multi-time Stanley Cup winners, and some of the best backstops in the game over the past decade.

When it’s all said and done, more than half the NHL could have a new starting goaltender before the end of October.

The Penguins are believed to have one standing offer on the table for two-time Cup winner Murray. The Maple Leafs, Oilers, Flames, Senators, Sabres and maybe even Avalanche are among the potential suitors for Murray’s services – a list that may soon grow.

But even with Murray’s playoff pedigree and youth, it has likely been difficult for Penguins GM Jim Rutherford to squeeze leverage from teams who know that the market will be flooded in short order.

Even teams with two goaltenders under contract for next season –Florida, Carolina, Minnesota, Colorado and Nashville – could tinker given the teeming market.

That list doesn’t include the Boston Bruins. Is it possible that Tuukka Rask has played his last game wearing the spoked-B after leaving the bubble in the middle of the Stanley Cup playoffs? He has one year remaining on his contract, but perhaps his time in Boston has run its course.

Hockey’s most important role is also its most fickle position, a job in which individual success is hard to consistently replicate year after year, and depends on the team composition in front of him.

There will also now be more movement than ever as teams attempt to plug and play in search of the best values.

Wednesday’s trade just hit play on the music. We’ll see where everyone is sitting once it stops.