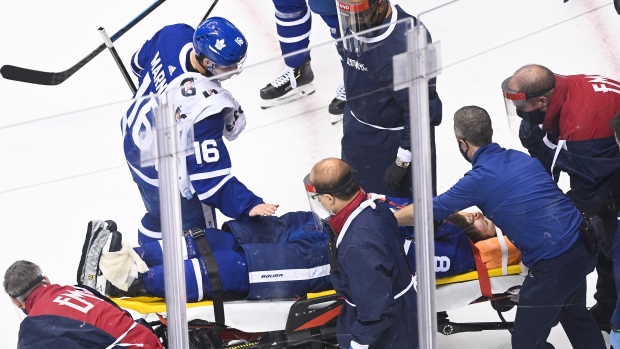 Less than two minutes away from clawing back to level ground against the plucky Columbus Blue Jackets, the only sound that could be heard inside Scotiabank Arena on Tuesday night was the clamoring of a stretcher and back-board being assembled for injured Toronto Maple Leafs defenceman Jake Muzzin.

“Nice to close it out for him,” John Tavares said of the 3-0 win, “But certainly tough to see, especially how much we love that guy.”

Killing a penalty behind the Leafs’ net in the waning minutes, Muzzin careened out of control after a cross-check from Pierre-Luc Dubois. His head collided with Oliver Bjorkstrand’s left leg and Game 2 ground to a halt for 15 minutes while Muzzin was attended to by team, league and emergency medical personnel.

“I just remember clearing the puck and I remember kind of turning over and seeing him on the ground. Kind of saw him get up on all fours,” Mitch Marner explained. “They dumped it in and hit the ref. At that point, he was back down, full lying down. I just skated over to him, asked if he was okay, he just kind of said just give him a second.”

Muzzin, 31, sat up momentarily and attempted to flex his hand and fingers - as if searching for feeling in his extremity - before laying back down.

Muzzin was transported to St. Michael’s Hospital in downtown Toronto, just a handful of blocks from Scotiabank Arena. The Maple Leafs reported he was “alert and able to move all limbs,” and coach Sheldon Keefe said the team was waiting further assessment.

A seemingly routine play has now cast a shadow on the Leafs’ blue line in this best-of-five qualifying round.

Because even if Muzzin is given the all-clear from doctors to physically return to action, he will put the NHL’s Phase 4 protocol to the test as the first player in these Stanley Cup playoffs to leave the confines of the secure bubble in emergency fashion.

The NHL’s protocol calls for any player who returns from an excused exit - such as Blues forward Ivan Barbashev returning to St. Louis on Tuesday for the birth of his first child - to quarantine in his hotel room until four consecutive negative tests for COVID-19 can be produced over a four-day period.

But the NHL said on Tuesday night that Muzzin will not necessarily be subjected to the same protocol. There is no hard and fast rule, in the event of an injury that requires treatment outside of the league’s triage centre in each bubble, for how that player will re-enter the bubble and re-join his teammates if and when he is able to do so.

Instead, that decision will rest in the hands of the NHL’s Hub Medical Director, in consultation with the Event Medical Director, and it will be based on an assessment of the type and degree of exposure Muzzin is subjected to while outside the bubble.

That could shorten the amount of time Muzzin is sidelined. Under the original protocol, if Muzzin needed four straight days of negative tests, the earliest he could have possibly rejoined the Maple Leafs was on Sunday in time for a possible Game 5 - and that was a best-case scenario.

In other words: It’s all to be determined. And any conjecture will be moot if Muzzin is injured.

“I’m not really certain on exactly what the protocol is for this situation,” Keefe said. “I’m not exactly certain what the details are. Our focus is and always will be on his well being and making sure he’s OK.”

Muzzin, 31, has provided a much-needed sandpaper element since being acquired by the Maple Leafs last season from Los Angeles, where he helped the Kings to the Stanley Cup in 2014. He led the Leafs in hits this season and was second in average shorthanded time on ice per game.

The Woodstock, Ont., native had surgery for a herniated disc in his back at the age of 16 and missed an entire year of hockey.

If Muzzin is unable to play - with a pivotal Game 3 approaching on Thursday, immediately followed by an elimination Game 4 on Friday - then Martin Marincin would be expected to draw into Keefe’s lineup and pick up the slack on Muzzin's penalty killing duties. Marincin skated in last week’s exhibition game against Montreal as the Leafs’ extra defenceman.

On a night the Leafs were poised to celebrate finally solving Joonas Korpisalo and Columbus’ stingy system after nearly five scoreless periods, there was undoubtedly a sombre takeaway.

Because missing Muzzin for any length of time - whether it’s one game or the series - puts a dent in Toronto’s toughness quotient. No one, certainly not Marincin, brings the same muscle as Muzzin against the heft of a John Tortorella team.

Said Game 2 workhorse Tavares: “I think what he brings to our team is unmeasurable.”

“He really does mean a lot to us,” Marner said. “Being beside him there when he went down and stayed down, obviously it’s a little worrisome, and to see the stretcher come out, a lot of things running through our mind. We’re all on his side, we’re all praying for him, and just want to make sure when he does come back, he’s 100 per cent. There are a lot bigger things than hockey.”